Defending champions Dublin moved to the summit of the Lidl National Football League Division One table with an impressive comeback victory over Mayo at Croke Park.

St Sylvester’s forward Niamh McEvoy ended the contest with an impressive personal haul of 1-5 and was instrumental in steering the Metropolitans towards a second consecutive top-flight triumph.

Trailing by six points (3-2 to 1-2 ) after 20 minutes, Mick Bohan’s charges slowly reeled in their Connacht rivals.

After the westerners stormed in front with unanswered points from the Kelly sisters – Niamh and Grace – full-forward Rachel Kearns rattled Ciara Trant’s net with a powerful strike.

Dublin’s initial response to this set-back was immediate – Niamh McEvoy’s unstoppable effort raised a green flag at the opposite end – but they suffered a further blow on 11 minutes. Despite hitting the post off a close-range free, Kearns bagged her second goal off the ensuing rebound.

The holders narrowed the gap with a second Davey point, only for Fiona Doherty to subsequently fire home from a tight-angle for Mayo’s third major of the half. 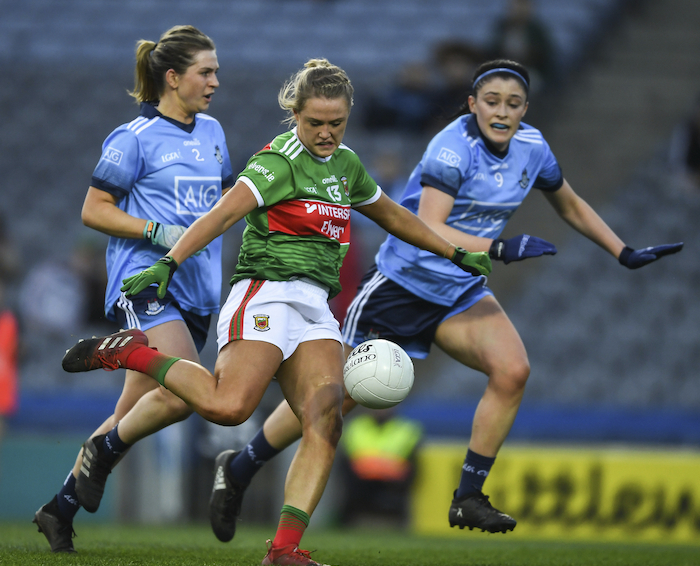 Going for goal: Fiona Doherty shapes for a shot at goal against Dublin. Photo: Sportsfile

The early introductions of Siobhan Killeen and Jennifer Dunne – Player of the Year Sinead Aherne followed in the second half – added an extra spark to the Dublin play, and they helped to reduce their deficit to 3-4 to 1-6 at the interval.

Nicole Owens and McEvoy split the posts on the resumption to bring the gap down to two, but they breathed a sigh of relief when Kearns' 38th-minute penalty blazed over the crossbar.

Although full-back Niamh Collins was sin-binned as a result of the latter incident, Dublin out-scored their opponents 0-4 to 0-1 in her absence. McEvoy (two ), Carla Rowe and Killeen found the range in this period, while Clodagh McManamon mustered a solitary Mayo score.

The returning Aherne and McEvoy edged Dublin in front for the first time with consecutive frees, before Doherty’s two-point salvo levelled matters moving into the home stretch.

Dublin never panicked though, and McEvoy and Davey raised white flags in the dying moments to see off the Mayo challenge.