Burrishoole and Belmullet booked their places in the Mayo GAA Intermediate championship final with hard fought wins over The Neale and Kitlimagh respectively on Sunday afternoon.

Flouirsh from Burrish' seals it

Burrishoole will be looking forward to a crack at the Mayo Intermediate championship in a fortnights time after a hard fought win over The Neale in MacHale Park on Sunday.

Colm McManamon’s men led from pillar to post in this one with the vital score coming from the boot of Paddy Mulchrone midway through the second half.

The Burrishoole centre half back made his way up field and was picked out by the deftest of flicks from Fintan McManamon to send him clear on goal and he made no mistake placing the ball past Keith Hennelly in The Neale goal.

The west Mayo men led 0-9 to 0-7 at the break with both Jason Doherty and Alan Ryder slotting over three points each and Colin Guilfoyle, Mulchrone and Fintan McManamon adding the others.

The Neale stayed in touch in the opening half thanks to a trio of points from Patrick Hopkins along with scores from Tommy Conroy, Brian O’Halloran, Stephen Conroy and James Duffy.

The second half was tough battle and The Neale battled their way into a 0-11 to 0-10 lead after 41 minutes, outscoring their opponents by four points to one after the throw in, with Padraic Walsh kicking three points and Tommy Conory landing a really excellent score, with just a Jason Doherty free in response for the eventual victors.

However the McGovern Park outfit roared back into the contest with Doherty swinging over two fine frees to edge his side back in front by the 14 minute mark, the lead was stretched out to two a minute later when Patrick Cannon slammed the ball over the bar.

When Mulchrone’s goal rustled the back of the net it looked like there was only going to be one winner from there and that’s how it was despite the best efforts of The Neale, who had sub Sean Cosgrove kick two fine points, but points from Doherty and sub Micheal Moran saw Burrishoole home and into the final. 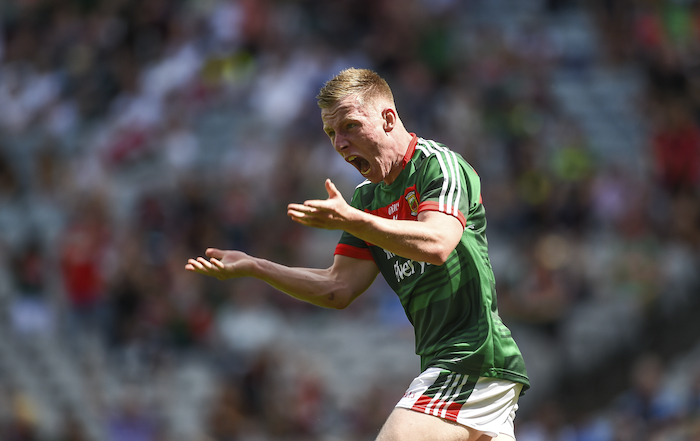 Belmullet made their way back to their first adult county final in over three decades at the end of a pulsating encounter in Castlebar on Saturday.

Cathal Barrett was the hero for the north Mayo men bagging two goals in the second half, having come on as a first half black card sub for Ciaran Conway.

It looked like the game could be heading for extra time when Donovan Cosgrove bustled his way through the Belmullet defence to slam home Kiltimagh’s second goal three minutes from time to level it up.

But in the six minutes of injury time Damien Mulligan’s men held their nerve and points from Micheal Keane and Ryan O’Donoghue saw them home by two points.

Kiltimagh were out on their feet at the end having to play with 14 men for the final quarter of the game after Sean Walsh was shown a red card for an off the ball incident with Ryan O’Donoghue, but the north Mayo men were deserving victors.

Kiltimagh led by two at the break on a score of 0-7 to 0-5 with Eoghan Lavin kicking four points in the opening half, Bryan Gallagher a brace and Thomas Keegan chipping in with the other.

The Belmullet scores in that half came from two Johnny Donoghue frees, a monster of a free from Shane Nallen and points from James Kelly and Micheal Keane.

Cathal Barrett cut the gap back to a single point early in the first half, but points from Lavin and Keegan put Kiltimagh three clear five minutes in.

Belmullet doubled down on their efforts and points from Keane and Gerry Barrett had just one between the sides, before Cathal Barrett hammered home his first goal after being brilliantly picked out by James Kelly to put his side into a 1-8 to 0-9 lead.

Kiltimagh came right back at them and Cillian Finn somehow managed to squeeze in his effort to the back of the net on 16 minutes and from then on in the action and tension ramped up with Cathal Barrett grabbing his second goal and Cosgrove finding the net to leave it all to play for down the home straight - and it was the Bemullet men who found the extra gear when it counted.