The first two spots in the semi-finals of the Mayo senior football championship were clinched on Saturday night in MacHale park with Breaffy and Ballintubber taking their places in the final four.

Breaffy edge at the death

The first game of the evening was the most anticipated clash of the weekend with James Horan’s young Westport side looking to lay down a marker against a Breaffy side looking to finally get over the line after coming close in the past few years.

The west Mayo derby also pitted two of Mayo’s biggest names against each other with Lee Keegan and Aidan O’Shea going face to face with local pride at stake.

At the end it was O’Shea and his teammates who were celebrating after claiming a narrow one point win, thanks to a late Robert Hennelly free.

Breaffy also had to play out the final 15 minutes of the game with 14 men after Matthew Ruane was shown a black card only minutes after picking up a booking - but they were able to use their greater experience to grind it out when it counted.

The game was slow to get moving with 20 minutes passing before a side scored from play - that score from Stephen McDermott put Breaffy into a 0-4 0-1 lead - their earlier three points coming from a brace of Conor O’Shea frees and another from Robert Hennelly. Westport’s solitary score up to that juncture had also come from a placed ball - from goalkeeper Paddy O’Malley.

Aidan O’Shea put his side four points clear nine minutes from the break after being set up by his older brother Seamus following a powerful run. Killian Kilkelly cut the gap back to three points with a well taken free a minute later - as both sides continued to feel each other out.

Points from Conor O’Shea and Hennelly had Breaffy five clear on 25 minutes, before the younger O’Shea and Colm Moran traded points to have Breaffy 0-8 to 0-3 up three minutes shy of the end of normal time in the half. 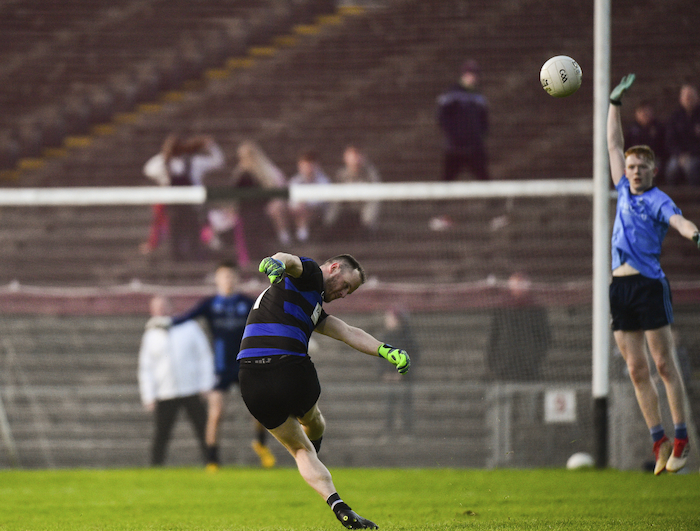 Up and over: Robert Hennelly kicks the winning point for Breaffy. Photo: Sportsfile

That lead was stretched out to six by another Hennelly free on 29 minutes, but in the three minutes of injury time Westport found their rhythm, running from deep with support runners coming off the shoulder and they tagged on two points from Moran and Fionn McDonagh to leave the scoreboard at 0-9 to 0-5 at the short whistle in favour of Breaffy.

Any thoughts that Breaffy had of stretching out that lead and seeing out a comfortable win, were not going to be entertained by Westport who went through the gears in the second half.

McDonagh fired over a lovely point five minutes in to bring it back to a three point game, that was followed by a great Colm Moran score following some excellent play by the aforementioned McDonagh and on 44 minutes there was just one point between the sides after a Kilkelly pointed free and two minutes later the same man had the game all square from another placed ball.

Breaffy were reeling at this stage and needed to get a score to settle their nerves - and they did just that on 50 minutes through a Conor O’Shea free bringing to an end a scoreless run and a series of missed frees.

Westport sub Lewis Cawley hit back almost straight away and it was ten points each and all to play for. Westport almost snuck a goal four minutes from time when sub Colm Higgins got his hand up to flick a Paul Lambert ball off the post.

With time ticking down, Breaffy won a free out one the stand side of the field beyond the 45, but using his experience Aidan O’Shea shaped to take it quickly with Westport men not back the required distance and the ball was brought in closer to goal and Hennelly held his nerve to to edge his side in front.

Westport had a chance to level it up shortly afterwards with a long range O’Malley free, but his effort just clipped the outside of the post and dropped wide.

Then with time ticking down a great break started by Lee Keegan was worked through Niall McManamon and on to Kilkelly who had a sniff of a goal to win it and he went for it, but Seamus O’Shea got back to get his body in the way to clear the danger.

Breaffy held on to the ball and played keep ball over the final closing few seconds to secure the win and their passage into the final four by the slimmest of margins.

Ballintubber take their chances to ease into semi-finals

The second semi-final of the evening spun irrevocably in Ballintubber’s favour when they two two goal chances late in the first half to kill off a spirited Moy Davitts challenge.

Cillian O’Connor got the scoreboard ticking inside the opening minute with a pointed free and that was quickly followed by Alan Plunkett’s first of the evening.

Moy Davitts though weren’t here to just make up the numbers and a Brian Reape point followed by one from Anthony Jordan after Brendan Walsh pulled off a good save to deny Alan Bourke a goal four minutes in had the game all tied. 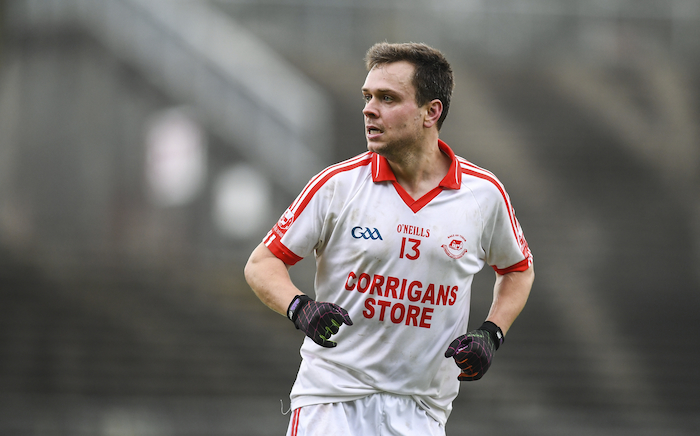 On form: Alan Plunkett was in great form again for Ballintubber on Saturday night. Photo: Sportsfile

O’Connor tapped over his second free of the day to put his side back in front before Reape kicked a great score to square things up once more and that was followed by two points on the trot for Pat Clarke’s since from Padraig Ruane and Liam Byrne to have he outsiders 0-5 to 0-3 in the lead on 12 minutes.

The lead didn’t last to long, with O’Connor kicking another free and then hammering one goanward that required a great save from Christopher McGlynn to keep it out of the net.

Jason Gibbons then kicked the first of three first half points he would land to put the ‘Tubber back in from before a Reape free levelled it up once more. Gibbons and Sean Kelly swapped points to leave it at seven each, before a Byrne point put Moy Davitts back in front for the final time in the game.

The next score was the first major of the game and it come from the boot of the inform Alan Plunkett, that was quickly followed by Gibbons’ third point four minutes from he break and then almost immediately by a Padraic O’Connor point then Alan Dillon pounced on a poor kick-out and soccer styled the ball home to send his team in leading 2-10 to 0-8 at the change of ends.

The second half was all about seeing it out for Ballintubber with the minimum of fuss, which they did in a very professional manner never letting Moy Davitts get within touching distance of them as they prepare for bigger challenges ahead.