Sarah Rowe and Grace Kelly tore Cavan asunder as Peter Leahy’s Mayo put a week of upheaval behind them to get their TG4 ladies SFC group four campaign off to a flying start in Clones.

In a game packed with goals and classy point scoring, Rowe stood tallest and despite being withdrawn, she return for a second time with 11 minutes remaining to see out the win.

Niamh Kelly kicked five points from play, while Grace Kelly found the net in each half of a stunning team performance.

Considering the turmoil that ravaged the Mayo camp with 12 players and two selectors departing, the opening 30 minutes football they produced at St Tiarnach’s Park was a sight to behold.

By half-time they scored 1-13, all of which came from play, while the full-forward line of Niamh Kelly, Rowe and Grace Kelly kicked 1-11 between them in that spell.

It was Aisling Maguire and Bronagh Sheridan who kept Cavan in touch with a couple of points each, but scores seemed to come easier to Mayo and Rowe kicked three of her side’s first four points to get them off to a great start.

Mayo were 0-8 to 0-5 ahead by the 17th minute, but Cavan pulled level moments later when Aisling Sheridan gathered a short free and Maguire found the net. 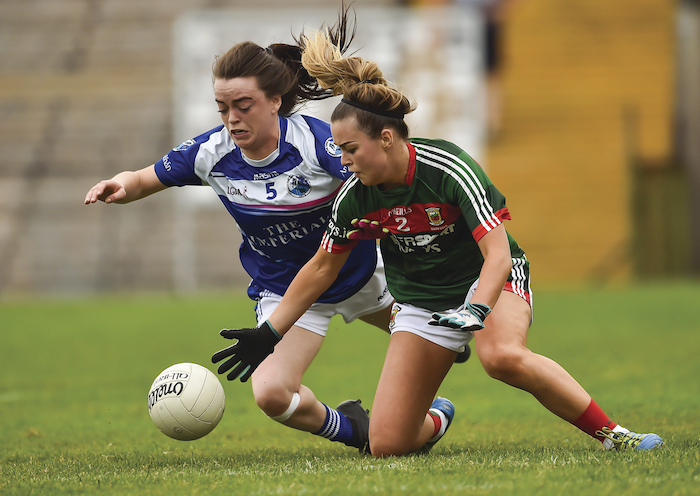 Mayo needed Sorcha Murphy on her toes after that and she pulled off two fine saves to deny Donna English and Sinead Greene, when goals seemed certain to follow.

Six minutes from the interval Mayo surged ahead again when Grace Kelly powered through and goaled off the back of Dayna Finn’s turnover on halfway, but in the 30th minute English scored Cavan’s second goal, although the brilliant Niamh Kelly kicked her fifth point of the half to put Mayo 1-13 to 2-6 up at the break.

Bronagh Sheridan got Cavan off the mark after the restart with a contentious effort, but after Kathryn Sullivan landed an inspiration effort on the run for Mayo, Peter Leahy’s side moved seven clear when Grace Kelly hit the net for the second time in the 33rd minute.

The goals continued to flow though, and Aisling Sheridan goaled on the turn for Cavan two minutes later, and Catherine Dolan made it two in four minutes to cut Mayo’s lead to three.

Amazingly Rowe bagged the seventh goal of the game in the 39th minute when her brilliant dummy earned her a yard in the small rectangle.

Cavan did keep plugging away and a couple of frees from Maguire and Roisin O’Keeffe’s score meant Mayo could not settle, but Grace Kelly kicked three in a row to ease any doubts as Cavan finished the game with 13 players following yellow cards for English and Maguire.