The Mayo u20s are heading to Croke Park on the August bank holiday weekend for a crack at an All Ireland u20 title.

Mike Solan’s men held off the challenge of a tough Derry outfit that pushed them all the way in an barnstorming encounter in Carrick-on-Shannon on Saturday afternoon.

Two late Tommy Conroy points saw them edge out the Ulster champions Derry at the end of a thrilling encounter that saw three goals scored in the first half and a rash of goal chances for either side during the remainder of the contest.

Mayo could not have asked for a better start with Ryan O’Donoghue hammering the ball to the back of the net inside the first 60 seconds.

The Mayo captain was picked out with an inch perfect pass from John Cunnane on the run and he made no mistake when the goal opened up in front of him. 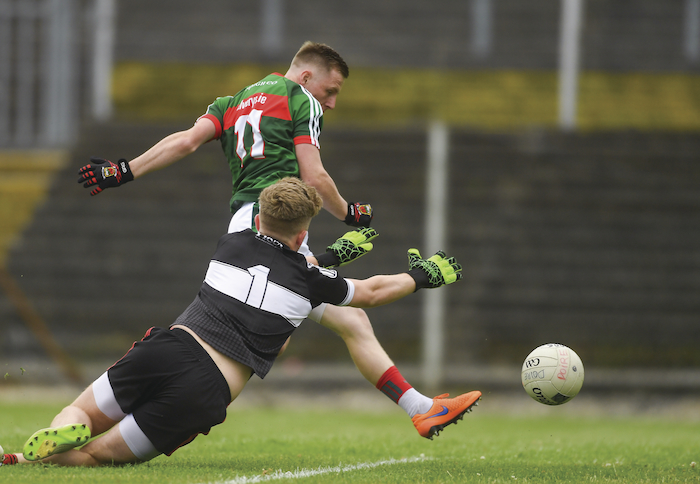 Derry responded through a Ben McCarron free not long after - but Mayo should have got a second goal inside three minutes when Oisin McLaughlin blazed his way through the heart of the Derry defence, but he pulled his effort wide of the target.

The Ulster champions cut the gap back to just one in the fourth minute thanks to a 45 from captain Conor Doherty.

Mayo registered their first minor of the day from a Ross Egan free in the seventh minute free after Tommy Conroy was hauled down 35 meters out.

Derry struck back with their first goal of the afternoon from the boot of full forward Callum Brown who sped his way along the end line before firing it low past Paddy O’Malley in the Mayo goal.

Mayo responded through a fine Paul Lambert point after some great work by McLaughlin in the build up.

With 12 minutes gone on the clock Derry chalked down their second goal of the game from Oisin McWilliams. The Oak Leafers centre-half-forward finished after some good build up play involving Ben McCarron and Doherty.

Both sides swapped points through Egan and Lorcan McWilliams to leave Derry leading 2-3 to 1-3 with 17 minutes gone.

From then on to the break it was all Mayo - Egan pointed a free from distance, then he added on another after Ryan O’Donoghue was pulled down on his way to goal after he jumped towards the sky to claim the ball and burst for goal.

Man-of-the-match Oisin McLaughlin hammered over a huge point from way out the park four minutes from the interval and not to be outdone Evan O’Brien launched over a point from downtown himself to send Mayo in leading 1-7 to 2-3 at the short whistle.

Mayo put themselves two clear just after the restart after Conor Diskin dispossessed Hartin in the Derry goal after a O’Donoghue effort from a free dropped short. 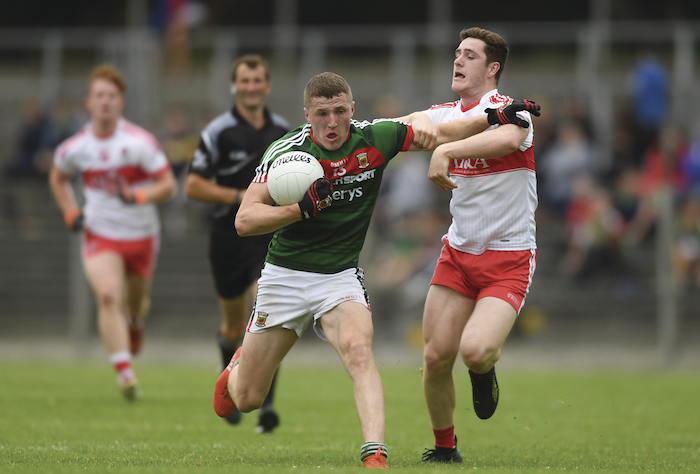 On the run: Conor Diskin looks to make a break for goal. Photo: Sportsfile

Derry were about to hit a little purple patch of their own over the next few minutes and McWilliams brought it back to a one point game with a point from play on 33 minutes. Ben McCarron levelled its up four minutes later and Mark McGrogan put Mickey Donnelly’s men into the lead at the two third mark of the contest with a well taken effort.

However, Mayo were about to hit the vital score of the game with their next attack. The ball was worked up the field with purpose and Egan spotted Paul Lambert free inside the cover and he found the back of the net despite the best efforts of Hartin in the Derry goal.

Another Egan free pushed Mayo into a 2-9 to 2-6 lead with 17 minutes to go on the clock - but Derry were not going to throw in the towel that easy and points from sub Brian Cassidy and McWilliams cut the gap back to just one.

In between those scores Derry could have grabbed a third goal - but Doherty’s close range effort was well saved by O’Malley.

Mayo stretched their lead back out to two thanks to a fisted effort from McLaughlin from a tight spot close to the end-line and they pushed it back out to three when John Gallagher made the most of a poorly executed restart by the Ulstermen.

Lorcan McWilliams tagged over his sides ninth point of the day with a well taken free and Derry really should have hit the back of the net again when Callum Brown was on the end of a flying hand passing move, but he flicked his effort wide of the posts from close range.

Mayo had a great chance to drive themselves home to victory when Ryan O’Donoghue was pulled down as he broke for goal inside the large rectangle and was awarded a penalty.

The Mayo captain stood up to take the spot kick himself, but his effort was well saved by Oran Hartin down to his left.

Mayo kept their heads and kept working and the two late, late Conroy points sealed their place in the All Ireland final against Kildare on the August bank holiday weekend.