What happened in Newbridge leading up to throw-in had been of the GAA’s great soap operas, played out in front of the country for all to throw in their two cents.

But what happened on the inside the white lines on the field was on of the GAA’s great dramas, gripping everyone watching on - with its intensity, beauty and sheer physicality keeping all eyes glued to the events unfolding.

Mayo go out of the championship before July for the first time since that horrible day in Pearse Park in Longford eight years ago, but this was nothing like that.

There may have been a number of the same actors involved in the action, but their performance levels was a good few notches above what happened then.

Questions will be asked by some of those actors internally over the next short while about their will and desire to do it all again.

If they decide they’ve had enough of this kind of life, they owe nothing to this county as they have given their all for our enjoyment and entrainment for years.

But there are plenty with years left in the tank, even if they don’t feel it in the bodies this week. A championship ending at the end of June, rather than the tail end of September could be just what the body needs as to come again. 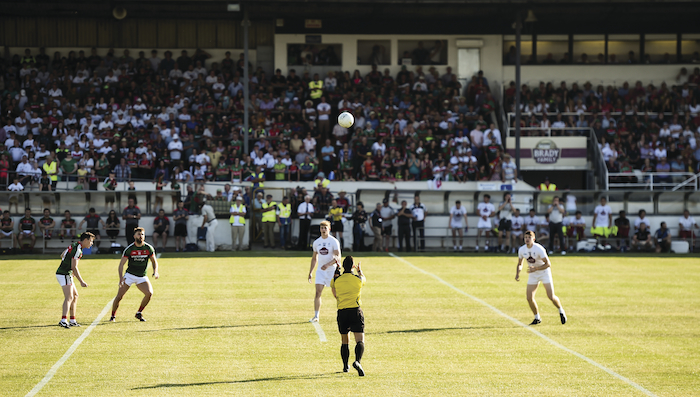 And it's off: David Gough gets the action underway. Photo: Sportsfile

But as for the action on the field, this was no ambush - Mayo knew they were entering a bear pit after everything that had gone on during the week - they stood up and went toe to toe with the bear, but at the end of the day - came up a little bit short.

Stephen Coen got things going inside the opening minute with a fine score after good build up play involving Aidan O’Shea and Jason Doherty.

Kildare were up for this and started to wrestle control not that long after, Johnny Byrne and Daniel Flynn kicked two wides before Fergal Conway pointed for his side on three minutes.

That was followed by a Neil Flynn pointed free and Kevin Feely point after Mayo messed up on the restart - due to the pressure they placed on David Clarke’s kick-out.

Both Cillian O’Connor and James Durcan missed chances for Mayo before Andy Moran pointed after a strong run by James Durcan ten minutes in.

The next six minutes was all Kildare with Cian O’Neill’s side kicking four points on the bounce as the atmosphere began to intensify in the baking heat around the ground.

Flynn fisted over the bar after he beat Ger Cafferekey all ends up down along the right endline. Flynn kicked another free after Mayo messed up on a restarting from a sideline ball, then Paul Cribben kicked one after Mayo turned over the ball again to put four between the sides and Flynn 45 had the gap out to five points.

Mayo got themselves back into the game, when they hit their own little purple patch Cillian O’Connor kicked two frees inside two minutes - then Paddy Durcan popped up with the first of his four points from play over the day.

If Mayo people are concerned about the future, the performances of Durcan and Diarmuid O’Connor will have given them great things to look forward two. Both men emptied themselves and showed what players they are and what they can offer going into the future, not that anyone really doubted their ability.

But back to the action and Cillian O’Connor landed another free and Durcan his second of the day to level it up at 0-7 to 0-7 with 25 minutes gone on the clock.

Cillian’s fourth free of the day edged Mayo back in front before Paul Cribbing hammered one over to level it up with four minutes to go to the break.

Diarmuid O’Connor opens his lungs and his legs to drive through the Kildare defence to make it 0-9 to 0-8 on 32 minutes and a minute later Andy Moran should have pushed Mayo into a two point lead, but his shot was blocked down. 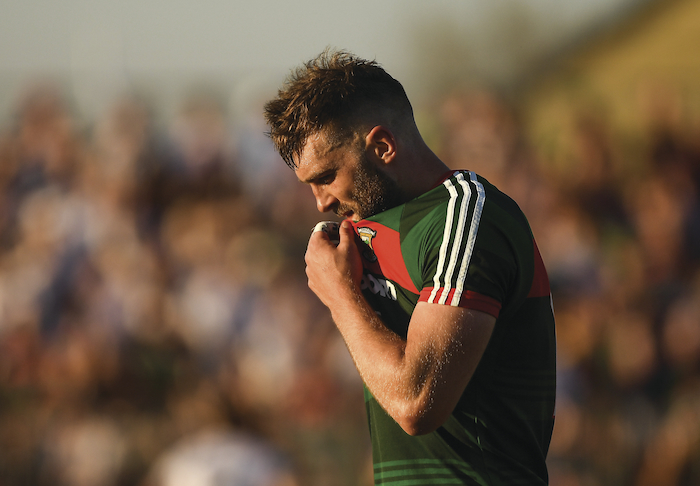 Tough to take: Aidan O'Shea in deep thought during the game. Photo: Sportsfile

The final say in the half was left to Neil Flynn who kicked his fourth pointed of the day from a close range free after Peter Kelly was fouled not far from goal after blistering run.

That score sent the teams in level at the break on a score of 0-9 to 0-9. And if people thought the first half was intense - the had a whole new level of tension and drama to endure after the interval.

Andy Moran kicked the first score of the final 35 minutes two minutes in after some good work by Aidan O’Shea - who put in a ocean of work for Mayo all day long.

Keith Cribbin levelled it up not long after and a good score by Paul Cribben after a surging run by David Hyland had Kildare back in front.

Cillian O’Connor had it all square from another free not long after and Paddy Durcan fired over when there was a chance of going for goal after some brilliant build up play involving Stephen Coen, James Durcan, Aidan O’Shea and Dirarmuid O’Connor.

That lead lasted all of 60 seconds as Neil Flynn pointed another free for Kildare - Mayo then hit the next two scores and looked like they could have a chance to drive for home after points from Kevin McLoughlin and Jason Doherty put them 0-14 to 0-12 ahead as the game approached the three quarters-of-an-hour mark.

But Kildare were not in the mood to let that happen, Flynn pointed another placed ball after Paul Cribbin hand been fouled as he broke for goal and then Cribbin finished off a move, after Kildare showed that bit more desire to win a breaking ball in the middle of the park.

After some great ball retention by the Mayo players that saw them with their chance Jason Doherty landed his second of the day and Mayo’s 15th point as the went back in front for the final time in the 51st minute.

Points from Daniel Flynn and Kevin Feely from the 50th to 55th minute had Kildare back in front and the home faithful really believing in them, a big score from Johnny Byrne had them two clear not long after.

Diarmuid O’Connor switched on the afterburners on 58 minutes and tried to get in for a goal, but he had two efforts blocked by the Kildare defence out for 45, which his elder brother duly converted.

Mayo levelled it up with eight minutes left in normal time when Eoin O’Donoghue hammered over an outrageous score from out on the left. 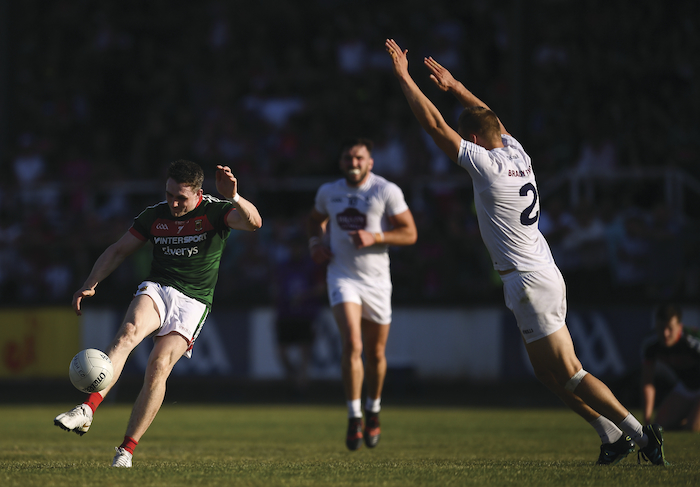 Durcan delivers: Paddy Durcan drives over one of his four points. Photo: Sportsfile.

But it was the hosts who drove on again, with Peter Kelly and Niall Kelly putting over points, when they could have probably both progressed the move one phase more and got a goal to kill off Mayo for good.

That man Paddy Durcan popped up for Mayo again on 66 minutes to leave just one between the sides as everyone settled in for the final nail biting scene.

Seven minutes injury time were flashed up by the fourth official, Niall Kelly got in for a goal chance that was brilliantly saved by David Clarke, but in the ensuing rush to get the ball a Mayo player touched it on the ground and a 13m free was awarded - which was tapped over by Flynn, Eamon Callaghan then made his sides lead three and Mayo had to get a goal.

They got in around the house and had a free that Andy Moran dropped into the danger area that led to another free on the 13m line and one last chance. In the build up to that chance, Aidan O’Shea was shown a second yellow card for something that happened unseen to many eyes. 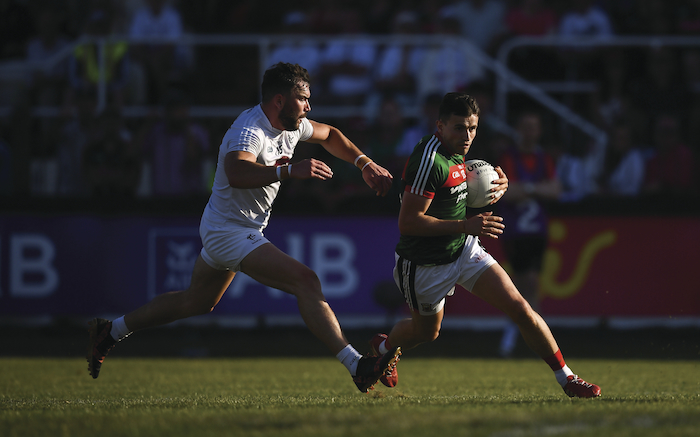 On the run: Jason Doherty looks to create some space. Photo: Sportsfile

The final chance from the 13m free was left to Andy Moran, with Kildare lining the goal with every bit of Kildare body they could find. Moran pulled his effort just to hard and it flew over the bar, kicking off the biggest celebration St Conleths’s park has seen in many a year.