Mayo were edged out by Galway in the blistering sunshine in MacHale Park on Sunday in the Connacht Ladies Senior Football Championship final.

The Galwegians were fully deserving winner at the end of an absorbing contest and the two scores they kicked late on after Mayo had levelled it up through an excellent Sinead Cafferkey score, were blows that Mayo could not respond to.

Despite being named on the substitutes bench and not being named in the initial list of changes to the starting line-ups announced before the game Cora Staunton was back in the Mayo first 15 for the start of the game. 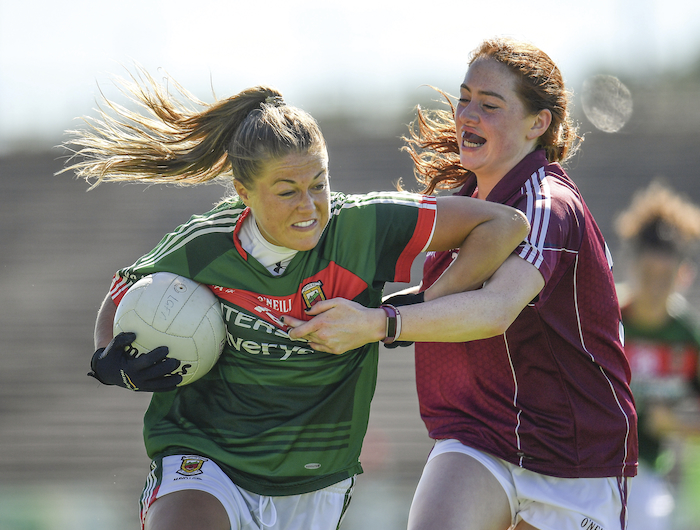 Driving on through: Sarah Rowe looks to break through the Galway defence. Photo: Sportsfile

Galway started the game the brightest and were three points to the good inside the opening three minutes with Roisin Leonard, Tracy Leonard and Nicola Ward as they exposed big gaps through the middle of the Mayo defence.

The homesides chances were dealt a major blow, with Aileen Gilroy not able to even take a place on the bench after picking up an injury during the week in the build up to the game and her absence was sorely felt throughout.

Mayo got the scoreboard moving in their direction five minutes in through a Niamh Kelly score after some good work by Rachel Kearns in the build up.

Kearns was back playing outfield after putting in a stint between the posts during the league after injury kept Aisling Tarpey out of action until this game and she showed her goalkeeping skills on three occasions during the contest, pulling off three great close range block downs.

Mayo cut gap back to a point through Cora Staunton’s first score of the day from a placed ball seven minutes in, but that was quickly responded to by a Aine McDonagh score after she ran straight through the Mayo defence.

Grace Kelly put just one between the teams ten minutes in, but Galway went on to reel off the next three points on the bounce with Olivia Divilly, Tracey Leonard and Roisin Leonard all finding their range in an impressive period of play to leave their side leading 0-7 to 0-3 on the midway point in the half.

The visitors tagged on two more points before the break through a brace of Tracey Leonard frees, with Mayo kicking four in response through two Staunton points and scores from Grace Kelly and Sinead Cafferky to have the visitors leading 0-9 to 0-7 at the short whistle.

Staunton and Roisin Leonard swapped points after the restart - before a good score from Mairead Seoighe put three between the teams on 37 minutes.

Mayo hit back through points from Staunton and Niamh Kelly to cut the gap back to just a single points with 41 minutes gone on the stopwatch. 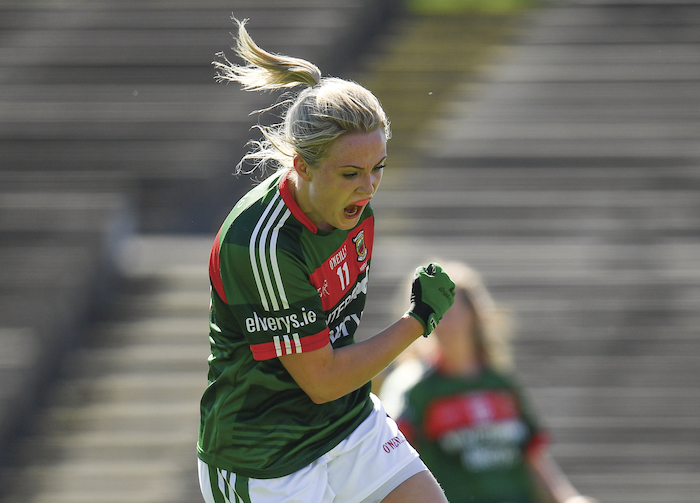 Back of the net: Fiona Doherty celebrates her goal. Photo: Sportsfile

But it was the visitors who pushed on again after those scores with Tracey Leonard, sub Deirdre Brennan and Emer Flaherty all getting points, while they were down to 14 players after Charlotte Cooney was shown a yellow card.

With 12 minutes to go Mayo looked to have missed their chance to get back into the game when Sarah Rowe pulled a shot on goal wide of the target on the near side.

The goal Mayo needed did arrive not long after and it came from Fiona Doherty after a surging run though the heart of the Galway defence to leave her side trailing by just a single point on a scoreline fo 1-10 to 0-14.

A Mariead Seoighe point eight minutes from time steadied the Galway nerves, but Mayo kept coming and a pointed free from Staunton and a great Cafferky score under pressure levelled the game up as the match entered its smouldering embers.

Unfortunately for Mayo it was Galway who pushed on over the closing few minutes with Tracey Leonard and Seoighe kicking the vital two points to see Stephen Glennon’s side home and into the All Ireland series as Connacht champions.