Both sides hit this game at full championship pace and left everything they had on the field. When the height of summer comes and the stakes are even higher - both sides left everyone in no doubt that if they meet in the championship another classic should be in store.

St Brendan’s Park in Birr is more used to hosting hurling encounters that regularly wrack up high scores and both sides played out their own epically encounter that was fitting to the location it was played in.

Sinead Cafferkey was the heroine scoring the vital goal ten minutes from time and then pulling off a last gasp goal-line clearance to keep Mayo in front at the death.

Grace Kelly put Mayo in front inside the opening minute from a free, but that was quickly cancelled out by a Orla Finn score.

Sarah Rowe edged Mayo back in front from a placed ball two minutes later, but Cork really found their groove over the next few minutes with Ciara O’Sullivan punching the ball over the bar after a Finn free dropped short on five minutes.

They followed that up with a point from Finn as Mayo struggled to clear their lines from their own kick-out that was followed up less than a minute later with the first goal of the game when Libby Coppinger palmed the ball to the back of the net after good work by Ciara O’Sullivan. 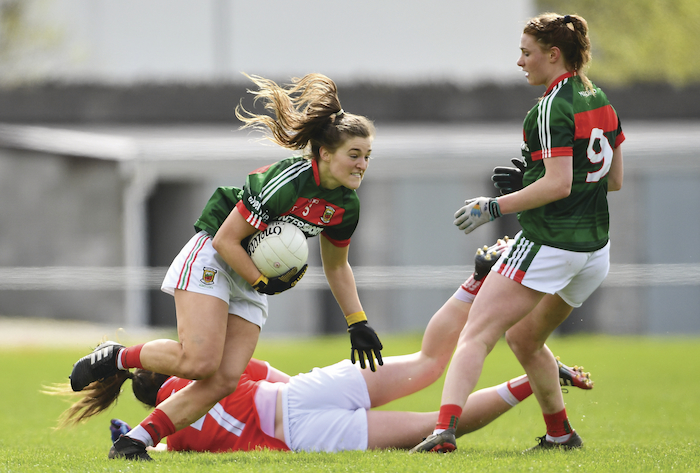 No turning back: Danielle Caldwell drives out of defence for Mayo. Photo: Sportsfile

Cork hit back through O’Sullivan’s second point of the day to leave the score at 1-5 to 0-3, Sarah Rowe cut the gap back to four with an excellent score from out on the right with 11 minutes gone on the clock.

Two minutes later Cork were given an golden chance to really stretch out their lead when Coppinger was taken down by Emma Lowther giving the referee no option but to award a spot kick.

Up stepped Eimear Scally but her penalty kick was well saved by Sorcha Murphy in the Mayo goal away for a 45.

Niamh Kelly and Finn swapped points to leave the score at 0-7 to 1-6 with 18 minutes gone. If those in attendance in St Brendan’s Park thought first 18 minutes of the game were good the final 12 minutes of the half were even better.

Mayo took control for a five minute burst with Sarah Rowe hitting three points and Grace Kelly two points to put Mayo into a 0-12 to 1-6 in the 24th minute.

They pushed that lead out to four with five minutes left on the clock through another Rowe effort and all was looking good for Mayo.

But Cork came right back at them and plundered their second goal of the day four minutes from the short whistle when Finn finished to the back of the net after good work by Coppinger and O’Sullivan in the built up.

Both sides kicked one more point each before the break - with Mayo going in leading 0-14 to 2-7, with it all to play for in the second half.

The second half opened with a bang with Aileen Gilroy kicking a fine score from play before Orla Finn responded for Cork with a well taken free inside the first two minutes.

Four minutes into the half Cork created another goal out of nothing with Libby Coppinger firing past Rachel Kearns who had just come on at half time to leave the score at 3-8 to 0-15.

Mayo wasted no time responding with Sarah Rowe kicking her eighth point of the game to leave just one between the sides and plenty more twists and turns ahead over the final 25 minutes.

Fiona McHale levelled the game up with 20 minutes to go after she jinked her way through a narrow gap to create a shooting space.

Grace Kelly edged Mayo back in front from a free with a quarter-of-an-hour to go, but that lead lasted less than two minutes as Orla Finn replied for Cork from a free.

The advantage swung back in Mayo’s favour in the very next attack when Sarah Rowe kicked her ninth point of the day from a close range placed ball.

Less than a minute later Mayo rattled the back of the net for the first time on the day, with Sinead Cafferkey palming the ball to the net after Fiona McHale pulled off a great side-step to beat her marker and draw the Cork goalkeeper to create the space for Cafferkey to raise the green flag.

Cork weren’t going to bend the knee that easy though and Eimear Scally and Finn kicked points to leave just two between the sides with just over three minutes left on the clock.

The rebels were reduced to 14 for the remainder of the game when Chloe Collins was shown a yellow card with two minutes left in normal time.

Just as the game edged into stoppage time it looked like Cork were about to hit a killer goal, Scally hoisted in an effort that Rachel Kearns punched clear it fell to Aine O’Sullivan who looked like she would finish it to the empty net, but Sinead Cafferkey got back to throw her leg out and clear it off the line.