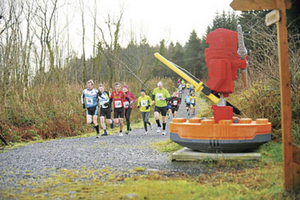 A number of Mayo runners were in action last weekend and put in good showings at the Flatline Half Marathon in Athlone. Ballina AC's Nora Newcombe was the winner of the women’s event in a time of 79.57, coming off a good performance the week before in the Charlestown 10K and the Tullamore Half Marathon two weeks ago. There were 14 Mayo AC runners in the event using it as practice for the upcoming Dublin Marathon. John Byrne was the best Mayo AC finisher coming home in fourth place overall in a time of 73.26, Brendan Hession finished in 32nd place in a time of 80.27 which was a new personal best. The other Mayo AC finishers were Paul Reynolds, Sean Murphy, Ann McDonnell, Laura Heneghan, Val P Glynn, Monica Joyce, Tracy Durkan, Mags Connell, Rebecca McHugh, Trish Kavanagh, Barbara Ronayne, and Finian Joyce.

Ten of the best for Mayo AC at masters championships

Six Mayo AC runners made the trip to Tullamore on Sunday for the National Masters Outdoor Track and Field Championships. The Harriers Stadium was full, busy, wet and there was a full seven hours of exciting events. The Mayo AC six were rewarded with a fine total of 10 medals. Angela O'Connor and John Byrne made their track debuts and enjoyed the experience. Both of them won medals in some very competitive category races. There were other fine performances too from Margaret Glavey and Pauline Moran.

Claremorris native Aine Gallagher (Mayo AC) took part in the fifth Energia Belfast 24-hour event last weekend. The event incorporated a 12-hour women's race. Aine was first to finish and completed a distance of 105k in the 12 hours - a personal best along with being a track record and a Irish record. Aine is no stranger to the ultra zone, as she has competed previously at Energia events and completed the Connemara Ultra marathon.

A record 257 people finished the now annual Manualla FC four mile race held on St Stephen’s Day in the Mayo village. The popular event was organised by the soccer club with Tracy Durkan leading the organising committee. Mayo AC’s John Byrne was the winner in a time of 21.30 with Castlebar’s Peter Tuohy coming in behind him in a time of 23.27, and Anto Devaney of Mayo AC in third place with a time of 23.43. Fourth sport went to his clubmate Henry Hughes, with Ian Egan of Tuam AC finishing in fifth and Mayo AC’s Sean Murphy in sixth place. The women’s race was claimed by Colette Tuohy of Mayo AC in a time of 24.44, with her clubmates Paula Prendergast and Sarah Syron finishing behind her in second and third place respectively. Ennis track member Siobhan Lennon finished in four, with Angela O’Connor from Mayo AC in fifth spot and Michelle Needham of Westport AC in sixth.

Mayo athletic club has announced its teams for the upcoming national 10k which is being held this year in conjunction with the Bupa Great Ireland Run 2010 this Sunday April 18 in the Phoenix Park, Dublin. The senior men’s team comprises Timmy Glavey and Andrew Lynskey. Mayo will be sending a six strong women’s team, with Breege Blehein McHale, Catherine Conway, Tracy Durkan, Mary Gleeson, Paula Prendergast, and Sarah Syron making it up. In the over 35 section, the men’s team will be led by John Byrne along with Gerry Galvin, David Huane, Robert Malseed, TJ McHugh, and Christy O’Malley. The women’s over 35 team comprises Cathy Connolly, Anne Fahey, Chris Gallagher, Ann Lennon, Ann Murray, and Angela O’Connor. Mayo AC will have a very strong representation in the over 50s men’s section with a seven strong team of veterans, made up of Mickey Ferry, Jim Gaughan, Tom Hunt, Owen Mongan, Patrick Moran, and Chris O’Connell.