In the second race of the Galway 5km series held in Craughwell, husband and wife team TJ McHugh and Catherine Conway finished first in the men’s and women’s race. TJ finished in first place with a time of 16.25, just ahead of Timmy Glavey also of Mayo AC with Jason Broderick of Craughwell AC back in third. In the ladies’ race Catherine finished well ahead of Stephine Fahy from Tuam in second place. 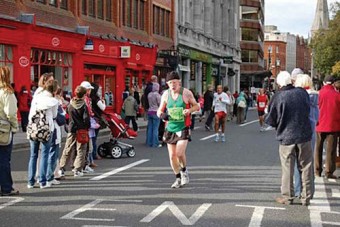 The 43rd Annual Hollymount Road Races take place on Sunday November 9. The 3km plus course is a familiar testing one, with a stiff uphill finish along the main street in the village. Three laps make up the men's 10km, while the women just do one in their 3km, race. Many famous names in Irish athletics have done battle here over the years and once again a top class field is expected from clubs around the province and further afield as well as the traditional coachload from Liverpool. Of course individuals are heartily welcome too. The race format has not changed much over the years, and is typical of many races around the country that originated in the 60s and 70s. The programme is: 1pm: U17 boys/girls 3km; 1.30pm: women's 3km, various master's categories. Entries (€10) /changing/post race presentation in Community Centre. Contact: Sean Reilly 094 954 0110, 086 840 2679

The Woodie's DIY AAI National 10k Road Race Championship of Ireland takes place on Sunday April 26, in Navan, Co Meath. Club athletes from every county will be there hoping to win individual and team medals in what is usually a very competitive race. Mayo AC will be among them and is sending a strong squad, some with plenty of experience and some new to championship racing.

Andrew Lynskey from Belmullet joined Mayo AC this year and has already established himself in the senior ranks. After a great performance in the National 10k last week, he won the 10k race from Clonbur to Cornamona on Sunday in aid of Zambia Housing Project. His finishing time was 37.15 on a very difficult course in windy conditions. Close behind in second place was clubmate Anto Devaney in 37.51. Other Mayo AC finishers were Dave Huane in 40.30, - fresh from his latest PB, 17.54 in the Athenry 5k the previous Tuesday, PJ Hall, and Christy O'Malley. 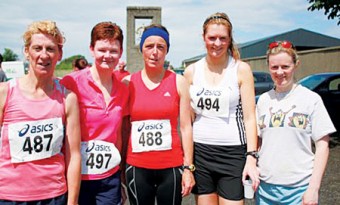 John Byrne was the clear winner of the Maugherow 10k on Sunday in 33.33. The race was run over a picturesque figure of eight course on the north Sligo coast, from the local church to the causeway with a tough second half and an uphill finish. Lucy Brennan (Sligo AC) was first woman in 38.08, less than two weeks after her victory in the Cork Marathon. Mayo AC's Andrew Lynskey was third in 36.34. Tom Hunt 40.36, PJ Hall 42.25, Ann Murray 45.07, Christy O'Malley 46.05, Sarah Syron 48.50 all had good workouts on a humid afternoon. Other finishers included Breege Staunton and Fit4Life participants Chris Clarke, Clare Walshe from Claremorris, and Michelle Reynolds from Ballina.

There were over 100 participants in the inaugural Ballindine four mile race on Sunday in aid of Western Alzheimer’s. The race was the brainchild of local organiser and Mayo AC athlete Dave Huane - with a little help from his running friends on both sides of the border. The runners/walkers put down their estimated finishing time on the entry form and were not allowed carry any time recording device during the race. The closest time to that predicted would determine the winner. As it turned out, three athletes finished within three seconds of their predicted time and were declared joint winners. They were David Mullins (Tuam AC), Angela O'Connor (Mayo AC) and Paul Fallon (GCH). They were followed by Michael McGrath (Mayo AC) +five secs, Fergal Egan (GCH) +10, Deirdre Ruddy (Mayo AC) +11, John Stagg, Hollymount +11. The fastest finisher was John Byrne (Mayo AC) in 21.17, with Ian Egan of GCH second in 23.27. Angela O'Connor was fastest woman in 26.50.

Big turn out in Balla

It may be just coincidence that the Balla 10k is on the same weekend as climbing the 'Reek'. It just gives the penitents another choice, while some extreme sinners opt for both. The 17th Annual Balla 10k, which is race three in the Vodafone C&C Mayo AC Road League, took place on Saturday evening. Conditions were very good with a slight breeze freshening faces as the field turned for home after 5k. Brendan Conwell and his team of 35 once again put on a well organised event, with an extensive prize list; no mean achievement in these lean times. As usual the Balla course provided a real challenge. Some 250 runners and walkers participated. This year the better conditions produced generally faster times and as usual many tortured and triumphant souls had tales to share. 2008 winner Robbie Matthews (Dunshaughlin AC) made it a double finishing first again in 32.05, 50 seconds faster than last year. He was 13 seconds ahead of Robert Malseed (Mayo AC) who improved his 2008 time by a minute. John Byrne third (33.21), and TJ McHugh fourth (33.47), showed that they are in very good shape as did the whole Mayo AC team in the lead up to the National half marathon in just under six weeks time.