Moylette makes his way back

St Anne’s Ray Moylette will compete in the semi-finals of the National Elite Championships in the National Stadium in Dublin this evening. The former European and World junior champion saw off the challenge of Sean Montgomery (Canal BC) last Sunday in the same venue. The Islandeady boxer will be up against Portlaoise’s Michael Nevin who won two bouts last weekend to get to this stage of the competition. If Moylette picks up the win he’ll face the inner of Dean Walsh (St Joseph’s/St Ibars) and Rohan Date (St Paul’s).

Following last weekend’s three events held by Ardagh/Crossmolina BC, Geesala BC, and Charlestown BC, the action moves to Swinford tonight, Friday January 24, in the Conway Fitness Centre at 8pm. Then to the Wyatt Hotel Westport for the Eagle BC tournament tomorrow at 8pm and the weekend’s action will wrap up with the sixth annual Vincy James Memorial tournament in Foxford Sports and Leisure Centre this Sunday, January 26 at 3pm.

There will be 30 Mayo boxers in action in Oughterard Community Centre tomorrow in the Connacht Boy 1, Boy 2, Boy 3 and u18 finals. The boxing will get underway at 10am with the first contest of the day. In Boy 1 Shea Pye, Knockmore will contest the 29kg final. William Maughan, Knockmore is in action in the 31kg final while St Anne’s Owen McDonagh is going for glory in the 33kg . The 42kg final is an all Mayo contest with Padraic McDonagh, Geesala and Declan McDonagh, Claremorris squaring off. The 42kg contest is another all Mayo bout, with Alex Maughan, Castlebar and Evan Ivers, Golden Gloves going toe to toe. Anthony Walsh, Golden Gloves will be looking for victory in the 46kg, with Stephen Maughan, Charlestown hoping to win the 50kg. Killasser’s Jason Maughan contests the 60kg final and it’s an all St Anne’s final in the 63kg showdown with James McDonagh and Rory Brennan facing each other.

Moylette and Lynch go for glory in Elite finals 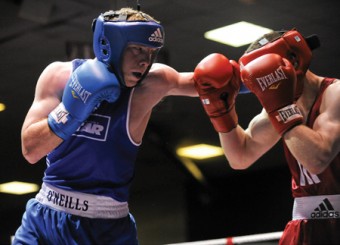 There will be plenty of Mayo interest in the action in the National Stadium in Dublin where the IABA Elite National Championships finals will be taking place tonight. St Anne’s Ray Moylette will be up in the fourth bout of the night when he takes on Ross Hickey in what is potentially the bout of the night in the light-welterweight (64kg) grade. Moylette is the defending European champion and ranked number eight in the world, while Hickey is a two time elite champion and is defending his title from last year. Moylette, who had plenty of injury problems last year which curtailed his chances of making it to the Olympics, is back in top form this year and over the past two weekends saw off Patrick Mongan 14-7 in his quarter-final victory and Sean Duffy 18-10 in his semi-final win last Friday night.