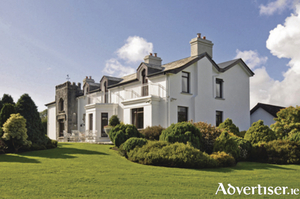 Described by many as one of Galway's hidden gems Killeen House, Bushypark, on the shores of the Corrib, will be auctioned next Thursday by Don Colleran. Built by three English solicitors in 1837, it was purchased by the Palmer family from the Glenlo Abbey estate as a dower house in 1904. In 1949 Mary Simonds, who was returning from India, purchased the house and was responsible for a lot of the landscaping in the beautiful gardens. She lived there until 1963 when an American merchant banker, Frank Manheim, bought it. It was the Manheim family that carried out considerable renovations to the property to the highest standards which are still very evident today as the property is in wonderful condition throughout.