The Dohertys of Carrigan were not ‘land-grabbers’

Galway Diary received the following statement from Adrian Martyn (great-great-great grandnephew of Peter Doherty, senior), who was shot dead at Carrigan, near Craughwell village on the night of November 2 1881. I am pleased to carry Adrian’s clarification:

The Galway City Museum will host two lectures over the coming days - one on the founding fathers of Galway city, the other on a Galway landlord during The Famine.

THE BLAKE family, one of Galway’s 14 Tribes, will be the subject of a public lecture in the Galway City Museum this Saturday at 2pm.

Every Galwegian knows Lynch’s Castle and the story of Mayor Lynch who hanged his own son, but what is the real story behind the Lynch family in Galway?

Public lecture on the Tribes of Galway

Galway’s golden age was during the mediaeval period when 14 merchant families turned it into an international trading hub, but who were they?

THE MAQUISARDS, the Galway duo of Adrian Martyn and Julie Hough, have released their debut album Nine Songs. 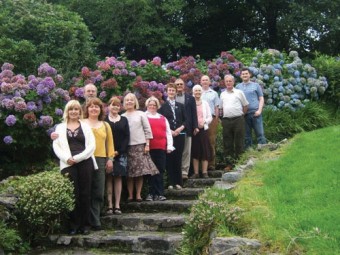 Richard Martin jr decided to leave Ireland for Canada in 1833. The younger son of Colonel Richard ‘Humanity Dick’ Martin, MP, of Ballinahinch, he had expected to inherit some of the family property. However his older brother Thomas — already deeply in debt —broke the entail on the family estates in Connemara, leaving Richard with few prospects. Together with his wife, Emily Kirwan, and their six young children (a seventh would be born in 1834), he emigrated, settling at Grand River, Ontario. Richard died aged 80 in 1878, having lived long enough to see his family grow and prosper far more than would have been likely had they remained in Ireland.