Flybe, Europe’s largest regional airline, celebrated its first major passenger landmark at Ireland West Airport Knock with its 100,000th passenger, Rachel Dale, from Manchester, travelling through the airport on Friday August 23 on a fight to Manchester. To mark the occasion Minister of State at the Department of Transport, Tourism and Sport, Michael Ring, presented Ms Dale with two free return flights to Manchester and tickets to a Manchester United match courtesy of the airport and Flybe. 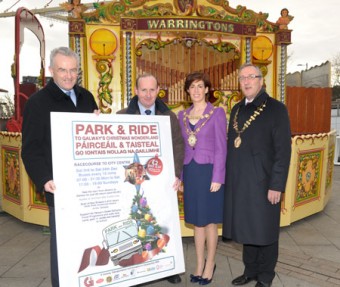 To encourage maximum uptake of it's Christmas Park and Ride Service, which begins on Saturday December 3, Galway City Council is keeping the fare at a highly competitive level of just €2 per car irrespective of the number of passengers.