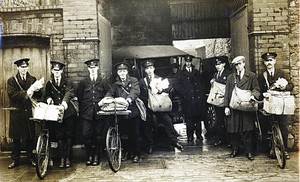 This photograph of a group of postmen was taken on December 17 1928 outside the General Post Office in Eglinton Street. The sorting office was inside the double gate, as was the long narrow passage that brought one into the back of the post office. The car in the background was a Model T. Notice the cobbled footpath. 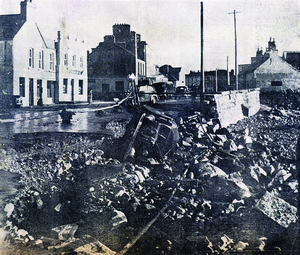 On the morning of September 16 1961, gale warnings were issued because of a possible impending storm. Violent storms are almost never actual hurricanes by the time they reach Ireland, but all of that was about to change that morning. Hurricane Debbie was the only hurricane, that is known about, to have made landfall in Ireland as a Category 1 event. Gusts of more than 180 kilometres an hour were recorded, and while the winds were not as strong as the gusts, they were capable of causing a lot of damage. Eighteen people died in Ireland as a result of the storm, six in the North and 12 in the South. They were killed by collapsing walls and trees, one was drowned from a small boat, and a young boy was blown into a stream. Tens of thousands of houses and other structures were damaged, some were completely destroyed, some suffered roof loss, while others had lesser damage such as windows blown in, etc.

Up the pole-the beauty contest begins

So the race is finally on. All the months of planning, strategising and getting the make-up on for the photographers comes to fruition as the images appear on every pole and roadside inside and outside the borough boundary.