The Galway National Park City initiative with President Michael D Higgins as its patron recently launched a website in the hope that it will become a major resource and information hub in helping to integrate nature into the fabric of the city.

Has the planet declared war on humanity over the last year? It certainly seems so as we witness one destructive storm after another in Ireland, heatwaves across Europe and southern Africa, hurricanes leaving trails of destruction from the Bahamas to Mexico, wildfires from Greenland and Siberia to Australia, melting ice from Antarctica to the Arctic, droughts in India, locust swarms in east Africa, increasing acidification of the oceans leading to the loss of a third of the largest structure on earth (Great Barrier Reef), city dwellers dying from poisonous air, flooding at crisis levels on every continent, soils becoming less fertile, and birds disappearing from the skies, insects from the fields and fish from the oceans.

As the January 2020 new car market draws near, Ford says it has an exciting range of offers to woo customers during the busy new car registration sales period.

Sky is the limit with drone delivery at Supervalu Westport 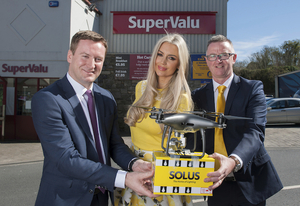 Irish lighting company Solus demonstrated that they are light years ahead as they piloted the first ever retail drone delivery of light bulbs to a retail store.