James Hanley RHA comes to Luan Gallery this November with his first solo show since 2011: DECADE. Taking a look back at the past ten years of this seminal artist’s career, DECADE celebrates the work of one of Ireland’s most renowned portrait artists.

‘If you want an anti-toxin for humbug, you will get it from the artist’ 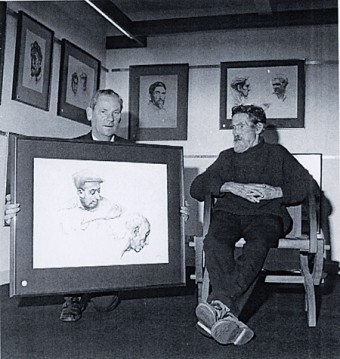 In 1968 Des Kenny, a Galway bookseller, was preparing to open a commercial art gallery in Salthill, the first of its kind outside Dublin. He needed a star artist for its opening night. He made an unusual choice, and invited Seán Keating. Had he invited Keating 30 or 40 years previously he would have invited a giant of his trade. Then Keating was regarded as one of Ireland’s greatest painters who had, in large canvases, mythologised the fighting men of the War of Independence, and the builders and engineers of the great Ardnacrusha project; the harnessing of the Shannon’s energy to power the fledging Irish Free State. In 1968, however, he admitted to Kenny ‘ I am dead as far as the art world is concerned’.