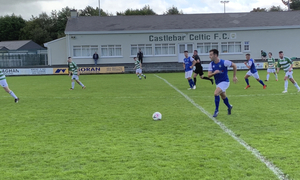 When Aidan Dunleavy calmly clipped the ball over the head of the advancing Jack Jenson to put Manulla 3-0 up after 29 minutes - it looked like his side could win this game by five or six or even more.

Friday September 30 sees the Ballinrobe Musical Society in association with Mid West Radio take to the stage at the Royal Theatre, Castlebar, for one night only to present Anthems - a collection of some of the most famous musical numbers of all time. Some familiar faces such as Seán Costello, Sandra Schalks, Michael Coen, and Daithí Ryder will be accompanied onstage by a chorus of 100 past and present members of the society. Together they will be presenting key songs from shows such as Ragtime: The Musical, Titanic, The Pirate Queen, and Les Misérables. Now, for the first time ever, the society will present highlights from these epic productions together with many more in a concert performance. Tickets are on sale now for €20 and include entrance to the after party in the Royal Theatre.

Beauty and The Beast in Loughrea

BEAUTY AND The Beast, the much loved French fairytale about an ugly creature whose gentle manners wins the heart of a beautiful girl, will be performed in Loughrea.