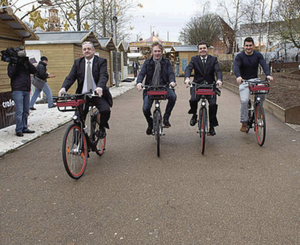 The Minister for Transport, Tourism, and Sport, Paschal Donohoe, was this week joined by Gerry Murphy, CEO of the National Transport Authority, Frank O’Donnell, general manager of Coca-Cola HBC Ireland and Northern Ireland, and Hector Ó hEochagáin, TV and radio personality, at Eyre Square to officially launch the Coca-Cola Zero Bikes in the city.

New bikes for city rental to be unveiled today 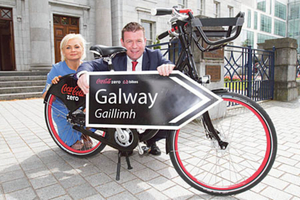 The new Coca-Cola Zero branded bikes, which will be used as part of the Galway Bike Rental Scheme, are to be unveiled at the Spanish Arch this morning.

More than 15,000 new tourists are expected for the west and northwest as Ryanair launches three new services from Glasgow, Eindhoven, and Kaunas to Ireland West Airport Knock this week. The launch represents yet another significant milestone for the airport and western region as it provides the first scheduled direct air access to the Dutch and Lithuanian market. It also opens up access to the Benelux region of Europe, which has a population of some 28m people with the new Eindhoven service providing convenient access to Belgium and Luxembourg.

Minister of State for Tourism and Sport Michael Ring officially opened the multi-use games area in Balla on Tuesday.