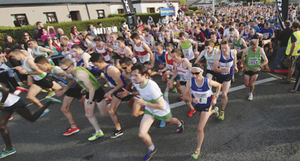 The 29th running of the Streets of Galway 8K road-race will take place at 7pm on Saturday.

Olympian heads off Kenyan in this year's Streets of Galway

A total of 2032 runners crossed the finishing tape in this year’s Streets of Galway 8k road race held on Saturday.

Ready, set, go for the Streets of Galway

The Streets of Galway continues its success story

The Streets of Galway 8k road race continues to be a success story on the Irish athletic calendar.