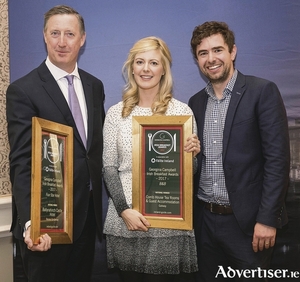 “How often do you see a breakfast review in the weekend restaurant columns?” Georgina Campbell, president of the Irish Food Writers’ Guild, asked when launching the Irish Breakfast Awards 2017 in Dublin. This awards scheme, organised in association with Fáilte Ireland, was designed to highlight the importance of the Irish breakfast to international visitors to Ireland and domestic travellers, and aims to support the use of Irish foods and quality produce as part of the Irish breakfast on offer. An old Galwegian gave us this photograph of Upper Abbeygate Street as seen from the corner of Market Street. In the late 1940s the building we see down at the end on the corner of Mary Street was Tommy Hopkins, victuallers. Opposite that, at the time, at the end of Abbeygate Street was Mrs Kemple’s house. Next door was Paul Heaney’s butcher shop; Moloney’s sweet shop; Barrett’s, Mrs Barrett had a cake making business; the Shapiros lived next door, and beside their house was an archway that led in to the back of the house; Ellie Carter and her brother were next; then Miko Cunningham’s sweet shop where he sold groceries as well. The next building was known as Carter’s Halls and among those who lived there were Mick Tuite, who was known only as ‘Shoots’, the Haynes family, Mary Anne O’Toole, Michael Melia, Chrissie Melia, Rose Anne Melia (these were Mary Anne’s children), Anthony Morris, Julia Murphy, Lizzie Hehir, Martin Cunniss, and Molly Hosty and her daughter.