Mayo County Council is stockpiling salt and is well prepared should there be another ‘big freeze’, similar to the winters of 2009 and 2010. 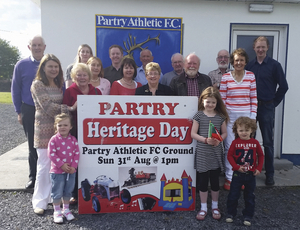 Dr Fiachra MacGabhann will give an absorbing bilingual lecture on Mayo placenames at 8.30pm in Partry Community Centre as part of the village’s Heritage Week programme of events.

A local charity, which reaches out to the needy, received more than 3,000 calls for help last year, a 50 per cent increase on 2010.

Ballina’s St Mary’s Secondary School marks the 30th anniversary of its proud tradition of musical theatre with a unique take on a classic – The Sound of ‘Modern’ Music.

Ambition off the field, to match it on the field

McHale Park has been a home away from home for all those who have ever been involved in covering sports for local media in Mayo since the Castlebar grounds opened its doors in 1931, when Mayo took on Kildare at the grounds official opening. With the rain spilling down from an overcast spring afternoon last Friday the current day members of the local press corps were given a guided tour of the ambitious new development that has been undertaken at the famous old grounds. Led by Mayo GAA Board chairman James Waldron, the sheer size and ambition of the project became apparent. The old stand offered seating for 4,482 people with only 2,500 of those fully covered, had bad sight lines, and was far from the standards that you would expect from a modern ground. The new stand will see the capacity of the stadium go from an existing capacity of 35,482 up to 41,217, with the new stand offering 9,685 fully covered seats, the stand will stretch the full length of the pitch on the Sportlann side.