Former FAI president Pat Quigley was not re-elected to the Mayo League management committee at its AGM on Tuesday night. The end of the long standing football official’s involvement in the day-to-day running of the game in the county will have come as surprise to many after he failed to be elected to the 10 person committee at the AGM.

McGrath to make the trip to the Euros

The continuing rise of Damien McGrath to the elite level of the game will continue this summer with the north Mayo man whistler heading the European Championships in Poland/Ukraine. McGrath has been appointed to take part in the tournament as an assistant referee which will be another high point to McGrath’s career. He has previously been involved in Champions League and Europa League games and was also involved in the action in the European u21 Championships in Denmark last year.

Kilkelly back in charge of Celtic 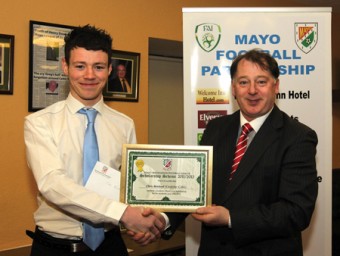 Castlebar Celtic has re-appointed Declan Kilkelly as manager of the club’s Super League side in a surprising turn of events over the past week. Kilkelly had been in charge of the side up to the end of last year’s Super League campaign when he led the hoops to a well deserved league title. Kilkelly had also been in charge of Celtic during their time in the League of Ireland A League and coached the youths’ side to a win in the FAI Youths Cup in 2007. Kilkelly still lined out for Celtic on a number of occasions in goal in recent years when injuries necessitated. He had recently also transferred his player registration to Achill Rovers where he was playing with the side in the masters league.

Must win for Hutton’s Mayo League 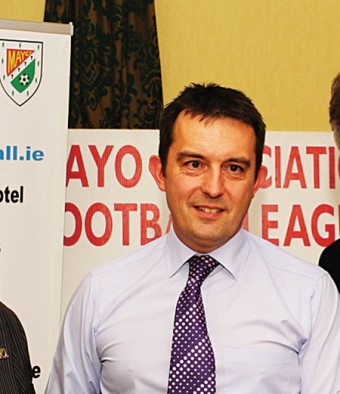 “It's do or die or whatever other way you want to put,” is how Mayo League manager Michael Hutton described Sunday's Oscar Trainer trophy clash between his Mayo League side and the Sligo/Leitrim League on Sunday in Milebush Park at 2pm. The competition, which kicked off a number of months ago, has only reached its second and final group game stage this weekend, and it is all to do for the Mayo League on Sunday.

Manulla FC have received an early Christmas present this year, with their Under-15 player Jesse Devers picked to play in Qatar on December 5 and 7 for the Republic of Ireland U 15 team. This is a major breakthrough for Jesse, who is a very talented player. He is wished well from everyone involved in Mayo Football, said Pat Quigley

A total of 16 Mayo teams will be in action in the Connacht Junior Cup this Sunday with all ties kicking off at 2pm. Bangor Hibs, Clew Bay United, Conn Rangers, Ballyheane, Glenhest Rovers, Snugboro United, Fahy Rovers, Kilmore, Ballyvary Blue Bombers, and Ballyglass will all be in action at home. With Killala, Partry Athletic, Newport Town, Ballina United, Moy Villa, and Straide and Foxford United all hitting out across the province in search of a place in the next round. Charlestown Athletic will make the trip to Ballyheane in a local derby as will Achill Rovers who head to Snugboro United, Mulranny United will go to Fahy Rovers as do Hollister who have a short trip to Kilmore, and Crossmolina who go to south Mayo to face Ballyglass.

It is another hectic weekend of action for a number of Mayo sides on the soccer fields this weekend. Thirteen Mayo teams will be in action across the province in Connacht Junior Cup and Junior Shield action either on Saturday or Sunday. The action gets underway on Saturday evening at 6pm, when Manulla make the trek to Shiven Rovers to take on the 2010 Roscommon and District League champions in what will be a very tough encounter for the Carramore men. 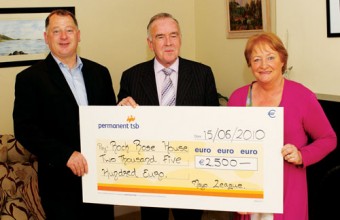 The Mayo League has donated the proceeds of its inaugural charity shield match which took place at the start of this season in Milebush Park, Castlebar. The shield was named in honour of the late Liam McEntee and was competed for by Ballina Town (Elverys Super league champions) and Manulla (Chadwicks Cup Holders). Ballina Town became the first winners on a score line of 2-1.

FAI AGM- Festival of football takes in the sights of Mayo

Since Sunday evening the FAI have been criss crossing the county as the festival of football, which culminates with Saturday’s FAI AGM in Mayo, got into gear. On Wednesday evening, they stopped off at Pat Quigley Park in Ballyheane to open the new astro-turf facility and the Mayo Advertiser, caught up with FAI Cheif executive John Delaney and former Irish international Ray Houghton to get their views on their week in Mayo.