Search Results for 'Our Lady of Lourdes'

Luan Gallery will present the work of two renowned Irish artists, Marie Hanlon and Bernadette Kiely, for the months of February and March.

The Grotto of Our Lady of Lourdes

A grotto is a natural or artificial cave used by humans in modern times and antiquity. Today, they are often used as shrines in which to place statues of saints, particularly the Virgin Mary. The Grotto of Our Lady of Lourdes stood in the southwest corner of the grounds of St Patrick’s Church. 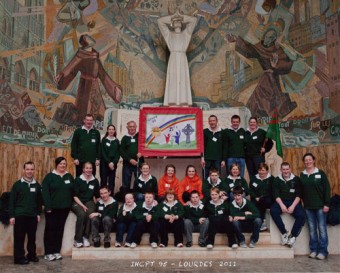 Earlier this year, the IHCPT — the Irish Pilgrimage Trust — celebrated its 40th anniversary. Each Easter Sunday approximately 1,000 pilgrims in various different groups leave Ireland destined for a fun-packed week in Lourdes including the Mayo group known as Group 95.

Evening of music and song

Marese O’Hara and Elaine Madden return to the Church of the Holy Rosary, Castlebar, for an evening of music and song on Friday March 11 at 8.30pm.

Is Ms Jennifer Sleeman a bit of a crackpot?

I have always thought it strange why so many women feel isolated from the Catholic Church, when it has at its centre a woman, Mary - the Mother of God. It is not right that many women feel they are ‘second class citizens’ within a church that attempts to reach out to all. Surely without Mary, the New Testament would be worthless. Surely after the Nazarene Himself, the Mother of Jesus, who is venerated by the Catholic and Orthodox churches, is the first and greatest saint in heaven. Mary is revered by all Christian churches, and honoured by Islam. At the very first council of the Church, at Ephesus four hundred years after Christ, she was declared to be the Theotokos, Mother of God (the actual God bearer). But even before that her image, holding the Child, was etched into tombs in the Roman catacombs. Being the Theotokos, Mary could have become remote, unreal from the human experience. After all we are told that she was born free from Original Sin, which as a total ‘theological illiterate’ I don’t fully understand; but I accept the logic that if Mary was not the mother of God, then Jesus was not God. I believe that He was. Yet despite the supreme position of Mary many women feel isolated, uninvolved, as if they have no contribution to make.

Virgin on the ridiculous as statue is stolen

Gardaí have appealed for information following the theft of a statue of Our Lady of Lourdes from a grotto in Renmore.

Featuring a host of stars such as Tony Allen, TR Dallas, Brendan Lee, and Frank Nelson, along with old reliables, the Carmelite Lourdes Band, the annual Carmelite Lourdes fund party takes place next Tuesday February 16 with compere on the night Tom Curtin.