Mayo AC celebrated their 25th Anniversary in style at a party night in the Welcome Inn Hotel, Castlebar at the start of the month. A broad spectrum of members from the early days of the late '80s to the present time were among those enjoying the celebrations. It was a wonderful opportunity for old friends and rivals to meet again, run down memory lane, mix with the post millennium intake, and share training methods from the days of hand-written results sheets to today's racing menu where it's chips with everything. In tandem with the club's success, membership has grown from 30 odd in 1999 to over 140 in 2012. 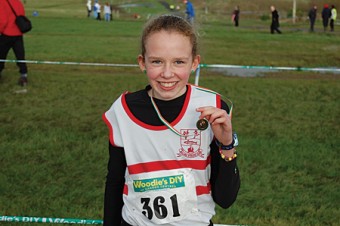 Ballina Athletic Club athletes travelled to Sligo Racecourse last week for the even ages and senior cross country championships and acquitted themselves very well. Emma Loftus ran a brilliant race in the u14 girls 3,000m race and finished in ninth place overall out of a field of 130 athletes, and took home a bronze medal in the process. Emma is eligible to run in the same age again next year. Hugh Armstrong, who competed in the European and World Mountain Running championships during the year, competed in the u18 boys 6,000m race and finished in eigth place overall to take home a bronze medal also. Maria Reilly was leading the u12 girls race until she had to pull out due to injury. Bridget Mills ran very well in the same competition, as did Cormac MacDermott in the u12 boys race. The u18 boys team of Hugh Armstrong, Cian Mulrooney, Jonathan Deane, and Ciaran Treacy performed very well and finished in sixth place overall. Roger Barrett was the first Mayo man home in the senior competition when he finished in 32nd place overall. His club mates Michael Canty, Sean Gallagher, and Tommy Neville competed also as members of the Mayo Intercounties Team. The uneven ages and novice championships takes place in the Curragh on Sunday next, December 11.

Among the thousands of runners competing in the Dublin Marathon last Bank Holiday Monday was a very strong Mayo AC team. In total 21 athletes made up the Mayo AC team which took on the gruelling course across the nationals capital. The senior men’s team consisted of John Byrne, Anthony Devanney, Timmy Glavey, Kevin Mellett, Brendan Gill, Paddy O’Toole and Dave Huane. The men’s o40 team was made up of the trio of Gerry Galvin, Christy O’Malley and Tony Gleeson, while the men’s o50 consisted of PJ Hall, Owen Mongan, Brian Cusack, Tom Hunt and Christy O’Connell. The senior women’s team was made up of Paula Prendergast, Sarah Syron, Anne Fahy, Yvonne Byrne, Anne McDonnell and Anne Shortt. There were a number of excellent performances put in by the Mayo squad and some medals may be wining their way to Mayo once the AAI confirms the team and individual results.