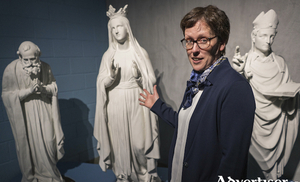 Three iconic statues standing at the religious apparition site at Knock, have been restored to pristine condition, with the help of National Lottery players, through their support of the Good Causes Fund. 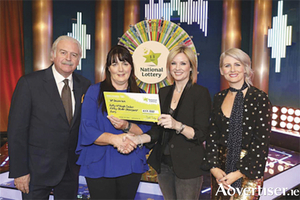 A Westmeath mum has promised to purchase a new tractor for her family farm after spinning the wheel to win €57,000 on the National Lottery Winning Streak game show on RTÉ One.

A syndicate group of four work colleagues from a city catering company who have been playing together for fourteen years were in high spirits on Tuesday as they collected their EuroMillions Match 5+1 prize of over €372,000 in National Lottery offices. 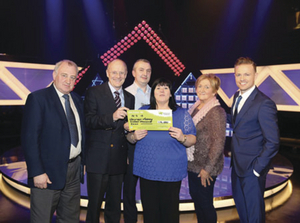 Maureen Mooney from Hollymount won €16,000 last Saturday night on the National Lottery’s, The Million Euro Challenge TV game show. Maureen is a familiar face behind the bar at John O’Hare’s pub in Ballinrobe, where she works part-time. 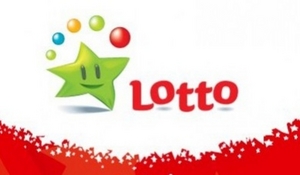 A Claremorris farmer toasted a €1 million win over champagne in National Lottery headquarters on Wednesday, just five days after the deadline passed for a separate €2.9 million jackpot to be claimed from a winning ticket purchased in the local Tesco last November.

Balla may have a Lotto millionaire

While there was much dismay locally in Claremorris when the deadline passed on Friday for a mystery Lotto winner to claim a €2.9 million jackpot, Mayo's Lotto luck hasn't run out just yet. 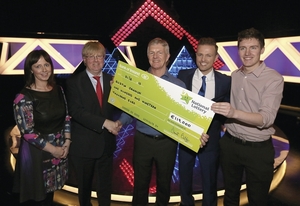 Mayo’s lotto luck in 2014 has been well reported by now. 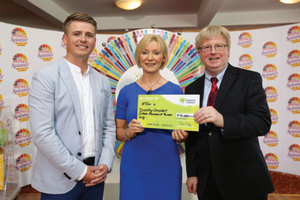 The National Lottery’s fourth Money Spinner event presented by Brian Ormond, took place at Breaffy House, Castlebar, Co Mayo, last Saturday night. Five players from Donegal, Galway, Carlow, Mayo, and Kildare won prizes to the value of €95,000. The biggest winner on the day was Damian Timoney from Donegal who won prizes to the value of €35,000. Dorothy Campbell from Claremorris won €16,000, including a shopping spree, at the National Lottery’s Money Spinner event held at Breaffy House, Castlebar on last Saturday evening.

Mayo’s winning streak on National Lottery games continued this week. Earlier this week two lucky players from the county took home €385,221 between them, both were winners on the popular Euro Millions game. First in was a man who was just one number away from scooping the €15 million jackpot on Tuesday, May 6. He matched five numbers plus one lucky star, winning a prize of €315,673.