Search Results for 'League of Ireland'

Encouraged by a morale-boosting away success over UCD, Galway United return to Terryland Park action tomorrow when Sporting Fingal visit the west.

This score line would suggest Galway United gained a valuable point before the mid-season interval against the reigning champions, but to those gathered in Terryland Park on Tuesday night the reality was that two points were dropped.

The visit of Malahide United to Terryland Park for the third round of the FAI Ford Cup on Friday night provides Sean Connor's beleaguered squad a welcome respite from the cut-and-thrust of league action.

Mervue have first national youth trophy in their sights

Throughout the opening stages of the League of Ireland season Galway United manager Sean Connor has repeatedly emphasised the importance of following an encouraging away draw with a home win, and that is precisely what Galway United will be trying to achieve when UCD visit Terryland Park tomorrow evening.

Euro-Festival preparations under way in Athlone

The planning process for this summer’s Euro-Festival, to take place in Athlone from July 24 to 31, has been set in motion by Athlone Town Council.

Throughout the years Galway United have suffered at Oriel Park, but Galway United will head for the County Louth town tomorrow night intent on avoiding another defeat.

Mervue United and Salthill Devon clash for the first time this season in the Airtricity League first division. 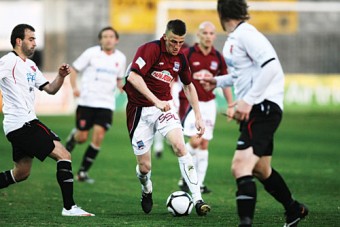 After losing the first of three Terryland Park premier league matches on the spin, Galway United will hope to register some points over a crucial weekend.