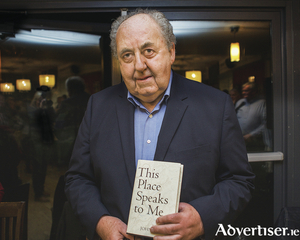 ‘If we had extra geese or cockerels my mother and myself would bring them to the market in Loughrea on the second Thursday before Christmas that was known as 'Big Thursday'. The market was held on the main street that time, you would not collect much money, maybe three shillings per goose but that would help to buy the Christmas.

The next illustrated lecture, on Tuesday December 4, will be A Wild Goose Chase and will be given by Dr David Cabot, the noted local naturalist, author, film-maker, broadcaster and ecologist, who specialises is seabirds and wildfowl.

Goose is the new black this Christmas

Increasing numbers of Kilkenny families are eschewing turkey in favour of goose as their bird of choice on the table this Christmas.

Halloween fancy dress at the Fox and Goose

The new management of the Fox and Goose are hosting a Halloween Fancy Dress party on Sunday October 30.

The Wonderful Story of Mother Goose brought to life in Castlebar

Mayo's longest running pantomime, the Castlebar pantomime, presents at the Royal Theatre, Castlebar, from January 12 to 16 its production of The Wonderful Story of Mother Goose. Mother Goose, who is played by Castlebar pantomime dame supremo Walter Donoghue, has it all — family, friends, Fairyland fairies looking out for her, and a magical golden egg laying goose. Mother Goose lives with her beautiful daughter Jill Goose (Tara Kelly from Kiltimagh) and a loveable son Billy Goose (David Tobin) in their humble home in Merrilea. The only shadow on people's happiness in Merrilea is the aptly named Clarence Creep, Squire of Cheatham Hall (cleverly played by James Murray from Coarsepark, Castlebar). His brother was the previous Squire of Merrilea but strangely did not make out a will to protect his son Colin (Terry O'Hara) from a life of poverty and by law all rights as a squire were passed to Clarence Creep. Was this really justice or the work of the conniving Clarence Creep?

WITH THE yuletide season in full swing it is time once again to relish the annual theatrical treat of the pantomime.