The saints are looking to marching on

St Gerald’s College, Castlebar, will be packing their bags and making the long trip to Nenagh tomorrow to take on the three times in a row Corn Uí Mhuirí champions Pobalscoil Chorca Dhuibhne at 3.15pm with a place in the Hogan Cup final up for grabs. The Kerry side claimed their provincial title with a win over De La Salle Macroom from Cork, with a five point win in Killarney three weeks ago on a score of 3-14 to 3-9. The Kerry side are managed by current Kerry senior football manager Eamon Fitzmaurice, while St Gerald’s are once again under the guidance of Daniel Forde and Tom Naughton, with Ger McDonnagh and Neil Douglas also coaching the team. Gerald’s picked up their second Connacht senior championship in a row a fortnight ago with a hard-fought win over St Attracta’s, Tubbercurry, putting together their first two in a row in the competition since 1996 and 1997 when they went all the way to the Hogan Cup final, before losing to St Patrick’s Academy, Dungannon. Last year Gerald’s fell short at the semi-final stage losing 3-8 to 1-7 to the eventual winners St Patrick’s Maghera, while Pobalscoil Chorca Dhuibhne lost out to St Patrick’s, Navan, in their semi-final.

FBD League up for grabs under Friday night lights

This evening’s meeting of Mayo and NUIG in McHale Park in the home final of the FBD League will bring together two of the men who put their name in the hat for the Mayo manager’s job last year. James Horan was the choice at the end of the search to fill the spot left vacant by John O’Mahony, but John Maughan who is now over the students was right in the running until he decided to withdraw from the race not long before the finish. 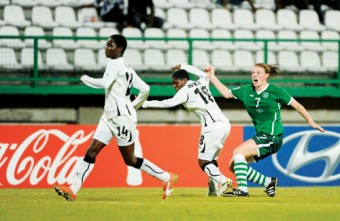 Saturday afternoon promises to be a battle in the west that is not to be missed. Ballintubber, who are going for three in a row, will face off against local rivals Castlebar Mitchels who are still smarting from last year’s final defeat. The two west Mayo clubs breezed through the competition up to the semi-final stage where both Claremorris and St Gerald’s put it up to them, setting up tomorrow’s mouth watering encounter.