Manulla were back giant killing again at the weekend when they defeated Ballina Town in a pulsating contest. With it delicately poised at the break at 1-1 Manulla kicked for home in the second period. Aidan O’Hora was on target for Ballina Town while Gary Durkan and Enda McGahon bagged the crucial goals for Tom Healy’s men. Westport Utd put their harrowing defeat to Ballyglass behind them from last weekend with a comprehensive 3-0 win against Charlestown Athletic. Goals from Pat Fitzgerald, Joe Lawless, and veteran Vinny O’Malley were enough for John Brennan’s men.

Celtic face injury crisis ahead of A league opener 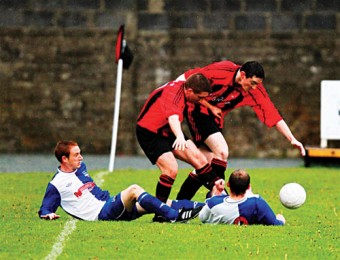 Castlebar Celtic are facing into a their opening game of the Newstalk A League this weekend with a injury crisis on their hands. Celtic will be without the services of Shane Hynes, Gary Price, Stevie Gavin, Ashley Stevenson, and Pat Fitzgerald on Saturday due to injury. But more importantly it looks like they will be without goalkeepers Danny O’Leary who has a groin injury and Robert Hennelly leaving them without a recognised number one between the posts. Castlebar Celtic manager Declan Kilkelly told the Mayo Advertiser this week, “ Danny had a great game last weekend against Carlow, but he played with a groin injury, he’s seeing a specialist, but we don’t know if he’ll be able to play any part in the game.” With no recognised goalkeeper available, Kilkelly could be in line for a place between the sticks himself for Celtic. “At the moment it looks like it could be me or an outfield player, but I’d prefer not to have to play, we just have to wait and see for now.”