More than 60 properties to go under the hammer

O’Donnellan and Joyce have just launched the largest property auction ever to be held in the west of Ireland, with more than 60 properties going under the auction hammer.

O’Donnellan and Joyce placed nine properties up for auction and successfully sold eight of them at its recent auction in the Victoria Hotel, Eyre Square. 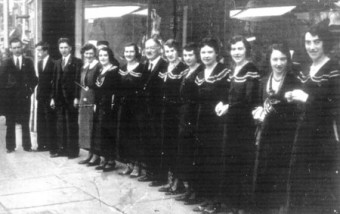 Anthony Ryan came to Galway from Craughwell to work as an accountant in Donnellan’s hardware shop at number 16, Shop Street. While he was there a new apprentice named Katherine Morrisson from Drumfin in County Sligo came to work there. They started going out together and later married. They decided to set up their own business and they managed to lease number 18 Shop Street.

Two faces lean out of the window... 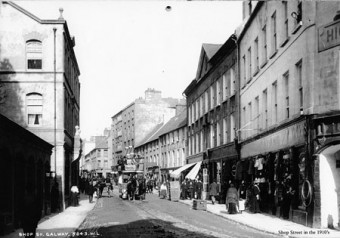 Before the disbandment of the Connaught Rangers in 1922, it was customary on Sunday mornings for the Protestant members of this proud regiment to march in full uniform, with bagpipes and drums, out of Renmore barracks, through the town to attend service at St Nicholas Collegiate Church. It was an exciting spectacle for many of the girls of Galway. They would gather in small groups, or lean from windows, to catch the eye of a handsome soldier. Monsignor Considine would often precede the parade waving at the girls to go away. Pointing up to the girls at the windows (many of them apprentices, who lived above the shops whose trade they were learning), telling them ‘Not to be looking at those Protestant soldiers’. Most girls would quickly hide, and once the monsignor had passed, pop their heads out again.