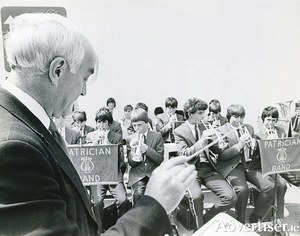 When you think of it, the Patrician Brothers have made a major impact on the city of Galway since they came here. This has been particularly evident in the music world of the city — they set up a fife and drum band well over a century ago; they have trained countless choirs down through the years, which in turn led to the formation of the Patrician Musical Society; they have formed many céilí bands, teaching the boys to play the accordion, the flageolet, the mouth organ, the triangle, the drums, and castanets. There was such a demand for these céilí groups at civic functions that the brothers decided to put their best foot forward and form a brass band.