Search Results for 'Conor Noone' 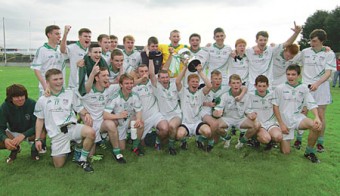 The Moycullen minor footballers had a terrific win last weekend in Tuam Stadium, claiming the minor A football title for the first time in more than 40 years when they defeated Claregalway by 2-7 to 1-6.

Provincial champions under way this weekend

The provincial colleges and national intervarsities were the main events of note last weekend. Pauline Gallagher representing Athlone IT picked up the ladies’ A singles title with a 21-6, 21-14, win over fellow Mayo student Amy Corrigan of the Sligo IT. Claremorris and St Mary’s College, Galway, were the venues for the boys’ and girls’ second level colleges over the weekend. The going was particularly tough in the eight boys’ grades but true to form, Kiltimagh duo T J Byrne and Shane Walsh from St Louis’, Kiltimagh, secured the junior doubles title with a reasonably comfortable win over Flanngan and Michéal Kenny, Castlerea CS, in their semi-final, and John Lalor and Conor Noone from St Mary’s in a well-contested final. Despite some fine performances, Mayo lost out to Galway and Roscommon in the other grades contested. In the girls’ finals at Claremorris, Melanie Nally was beaten by all-Ireland u16 champion Lauren O’Riordan in her junior singles semi-final, while Lorraine and Louise Gilmartin (Convent of Mercy, Ballina,) suffered the same fate in their junior doubles final.