How to succeed in sixth year

Local talent the one bright spot in demoralising campaign for United

Emma was the brightest at Bloom 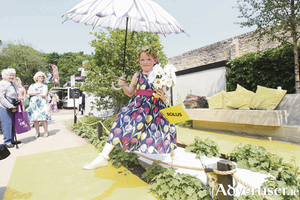 On Sunday last at the Solus Garden at Bloom in the Phoenix Park, Emma O'Shea (8) from Ballinrobe was chosen as the Brightest at Bloom on the yellow carpet from 10 finalists. Solus Brightest at Bloom is a nod to Ladies' Day but all-inclusive, open to ladies, gentlemen, children and all sunny dispositions young and not so young. It is not just about fashion but more about luminosity, brightness, and light. 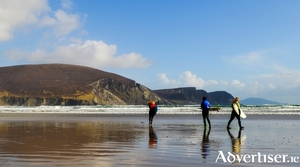 The bright sky glistened on our downturned faces as we turned left and past miles of sandy Mulranny beach when mum didn’t stop the car. We were nearly in tears and barely noticed the overpowering gloriousness of the gigantic rhododendron magenta entwined with thorny golden gorse. The car was slowing down, trapped behind a sheep with pink on its fleece. Slower and slower until we stopped. Out we traipsed, my toddler brothers and I, still looking glum. Mum touched my chin and pointed. The view was glorious. Azure blue sea gently waved in the distance, Clare Island stood tall whilst six seals danced proudly at the base of Croagh Patrick, its church sparkling like the moon at the top. Creeping down the rocky, sandy tor, sheep gently grazed amidst the gorse and bog weeds, pebbles creeking up our sandals, uncomfortable under our toes. And there hidden, like our very own secluded island, a beach, with golden sandy sand untouched by human. Well, it felt like it was untouched by humans, we were the only ones here. We settled the boys on a blanket with their spades, and true to form they found they had better spades, using their nimble fingers to shovel sand into their mouths as though they had never been fed. Mother fixed her head scarf and began reading her Maeve Binchy; mind you, with two toddlers I doubted she would get much reading done.