Brasserie on the Corner, standing the test of time

It is hard to believe that Brasserie on the Corner has been around for as long as it has. It seems like only yesterday that the team were putting the finishing touches to it, yet that was way back in July 2012, and it has been going from strength to strength ever since. Opened on a disused corner of Eglinton Street, The Brasserie brought life back to this slightly down-at-heel area. It benefits by being run by the same people that have the popular Dáil Bar, The Front Door, and Tom Sheridan’s in Knocknacarra, a professional team that do not tend to miss a trick, and from being under the watchful eye of Eimear Killian, one of the best general managers in the business. 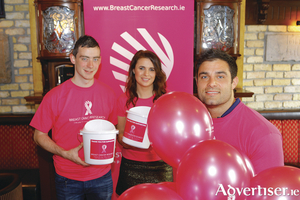 In support of October being the dedicated Breast Cancer Awareness month, Blake’s Corner Bar located on Eglinton Street has partnered up with Breast Cancer Research to host a jam-packed charity week from Monday October 24 until Sunday October 30.