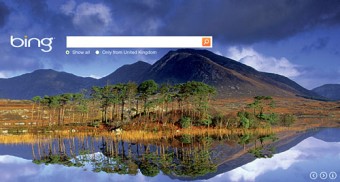 Microsoft search engine Bing is always on the lookout for inventive and interesting regional images to feature on the homepage, with the aim to encourage Britons to get out and see more of the great outdoors.

Animals at war, virgins in Loughrea, poitín, and peace at the ‘Augi’...

World War 1 is the backdrop for the London box office success War Horse. It’s the story of bravery, loyalty and a mutual bond that grew between a young farm boy and his horse. But it is the highly imaginative and skilful way that the story is presented that has caught London’s imagination. The play is based on a book by Michael Morpurgo; and a recent acknowledgement by the public of the role animals have played in war, from the horse, the mule, the dog, the pigeon, even the humble glow worm used by sappers in No Man’s Land as they drew maps in the dark*. During the merciless, and relatively recent Battle of Stalingrad, (July 1942 to February 1943), 207,000 horses were killed on the German side alone (the human cost was an unimaginable one million). Animals are still used to help solders navigate rough terrain, or for dolphins to seek out mines, and dogs to sniff out contraband.