Four local animal care and welfare organisations have been awarded funding towards their services for 2014.

There was a strong welcome from a number of politicians for funding for four animal welfare groups in the county which was announced this week. Michelle Mulherin TD said: “I am delighted that the Minister for Agriculture, Fisheries, and Food Deputy Simon Coveney, has confirmed that his Department has awarded funding totalling €46,400 to Mayo-based animal welfare organisations. The successful organisations are the North West SPCA, which was awarded €26,600, Mayo Animal Welfare, awarded €3,000, Mayo SPCA €9,800, and Ainmhithe Animal Rescue, which was awarded €7,000. These are the foremost west of Ireland-based organisations delivering animal care and welfare services and their importance is recognised by today’s decision.”

Farmer to pay €10k after failing to comply with court order

A farmer has been ordered to pay €10,000 in fines and costs after he failed to comply with a court order to reduce his stock levels.

Snow White and the seven bullfighters

IMAGINE SNOW White and The Seven Dwarfs transported to 1920s Spain and the world of bullfighting? Welcome to Spanish film Blancanieves.

On Sunday August 18, a group of animal lovers, and their dogs, will leave from five different Petworld locations across the country - Castlebar, Co Mayo; Terryland, Co Galway; Athlone and Mullingar, Co Westmeath; and Portlaoise, Co Laois for a 5km dog walk in aid of local animal adoption shelters and welfare charities.

The Loughrea Dog show will take place from 1pm to 5pm at the Temperance Hall on Sunday August 19. The show, which will be judged by Professor Gerard Fleming, promises to be a fun-filled day for all the family.

Pet retailer Petworld is delighted to announce the opening of its newest store. Located at Ashe Road, Irishtown the opening of the new store creates five new jobs in the area.

Adopt a pet this Christmas for life 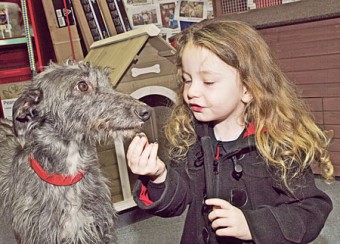 Petmania Kilkenny is urging people to consider adopting a pet this Christmas. Petmania was established to help and support local rescue centres.