Not our proudest few weeks, but it is time to let the lads at it

The widely anticipated County Board meeting passed off relatively peacefully last Thursday night with a few members of the board resigning over the process in which the new Mayo managers were appointed. The story had gained national headlines for all the wrong reasons and certainly it was a little embarrassing the way matters were conducted in appointing Pat Holmes and Noel Connelly. An apology was offered as there were and still are a lot of disgruntled people in the county. I am sure Kevin McStay and Liam McHale are bitterly disappointed at what happened, and some gesture or apology to both men should be offered as both are true Mayo Gaels who gave an awful lot to the green and red and they deserved at the very least an interview before been told they did not have the job. I am sure anyone reading this has heard the vile rumours about players not wanting McHale, which I am told could not be further from the truth. It is amazing how widespread the rumours went and pretty much to the point that people started to actually believe them. Liam McHale suffered a severe character assassination over the last few weeks and did not deserve it. Good luck to Pat and Noel; it is time to let them at it. The new management team along with selector Michael Collins and strength and conditioning coach Barry Solan from Ballaghaderreen were deep in discussion and taking lots of notes during the senior semi finals last Sunday. I am a little surprised a forward coach/selector was not incorporated in the set up, I guess they will be basing their team on a strong defence. I feel someone like Kevin O’Neill would have been a great addition to offer some insight into good forward play. I am delighted Barry Solan has finally been given a chance with his own county. Apart from working with Laois and Kildare he has also done a lot of work with Katie Taylor so there is obviously good pedigree there. If Hollymount/Carramore win the intermediate title on Sunday and get a good run in the Connacht championship, Noel Connelly’s wife Valerie and their children may not be seeing a lot of him for the next few months.

It was a hectic weekend of action in the Mayo GAA Senior Football Championship, with four quarter-finals and one relegation semi-final down for decision, along with a reply in the intermediate championship quarter-finals.

A weekend of ups and downs and big performances

I thought it impossible to see anything more bizarre than having to overtake an NYPD car on my way to MacHale Park last Sunday but just before the start of the Ballintubber/Knockmore county quarter final something else surpassed that. While I was watching the Ballintubber warm up to see if I could spot Cillian O’Connor ( to see if he was togged) I noticed a commotion in the middle of the field with all medical personnel running towards the place where Knockmore just had their team picture taken.

The final four showdown this weekend

It was a weekend for shocks and surprises last weekend as the two teams who have won the last three Moclair cups between them bowed out at the quarter-final stage. The biggest surprise of the weekend arguably was Breaffy’s victory over Ballaghaderreen in the first of Sunday’s games.

Knockmore and Conn Rangers stars to do battle for charity

In June 2012, PJ Loftus lost his battle with bowel cancer. PJ was an extremely popular and valued member of the Knockmore community and had been a dedicated servant to Knockmore and Mayo GAA for many years. To pay tribute to his father's memory and raise much needed funds for the Mayo/Roscommon Hospice, PJ’s son Alan has organised a charity match between the Knockmore senior GAA team and their soccer counterparts from Conn Rangers. The game will take place on St Stephen's Day at 1pm at the Knockmore GAA pitch. The Knockmore team will feature county stars Kevin McLoughlin and Shane McHale, alongside Alan himself, Aidan Kilcoyne, John Brogan, Declan Sweeney and the returning pair of Trevor Howley and Niall Canavan amongst others. The Conn Rangers senior soccer team who narrowly missed out on promotion to the Super League this year will be represented by Owen McNamara and Brian Hughes (who both featured on the Mayo Premier A league team of the year), along with Noel Butler, Darren Coleman and Joe Faughnan.

Ballintubber to defend their title against Ballagh'

Come this time of the season, the win is all that matters and that's exactly what Ballintubber and Ballaghaderreen both delivered in Elvery's McHale Park on Sunday afternoon. Both of this years senior championship semi-finals weren't games for the ages. What they were, was games that had to be won. Ballintubber who are looking to be the first team since the historic Garrymore side of the mid-seventies to put together a three-in-a-row title rein, booked their place in this years final, by coming out on the right side of a result that looked for a good portion of the game, was going to go against them.

Champions under pressure in three in a row chase 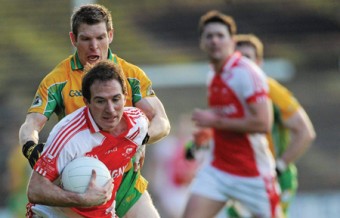 It has been a remarkable few years for Ballintubber, escaping with the intermediate title by the skin of their teeth in 2007 and going on to put together back to back senior titles in 2010 and 2011. This year, they are looking to make it three senior titles in a row. On Sunday in McHale Park, Crossmolina Deel Rovers will become the latest side to try to knock Peter Ford’s men off their lofty perch.

Big games will bring out the best over the weekend