Towey’s SPAR Express Topaz is helping the Kilmovee 10k Road Race spring into action as main sponsor of the event. The race takes place just outside Ballaghaderreen during the Easter weekend on Saturday April 4 to raise funds for the Mayo Roscommon Hospice and Kilmovee Shamrocks GAA Club. The Kilmovee 10k Road Race is in its sixth year and saw more than 500 runners competing in the event last year.

The sixth year of the AAI approved Clarenbridge 10k takes place Sunday at the Brothers of Charity Kilcornan grounds in the village.

This first Broadhaven 10k run, jog or walk will take place on Saturday, November 8 at 1pm. All are welcome to take part in the fully insured, measured course over rolling hills and beautiful scenery, set overlooking the idyllic Broadhaven Bay. There will be parking facilities provided at Aughalasheen NS with food and refreshments after the event. 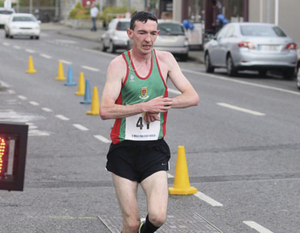 Huge turn out for the Galway Simon Kick Assphalt Race 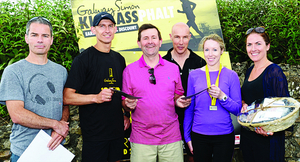 The sun shone and the crowds came out for the Galway Simon Kick Assphalt Race on Sunday.

The third annual Mayfly 10k challenge will take place in Oughterard on Saturday May 24 at 1.30pm.

Clare Island 10k to take place on May 24

The third annual Clare Island 10k has been announced for May 24.

Big turn out for Kilmovee 10k

Kilmovee was buzzing on Saturday and there was more than just spring in the air. The crossroads on the R325 was full of orange clad marshals, dandelions lined the roadsides, tulips saluted from gardens, an array of green sun flowered Hospice t-shirts mingled with multicoloured runners and walkers, and sprinkled with a host of red and green Mayo AC vests. The yellow balloon arch at the start line did a spectacular malfunction which added to the excitement but did nothing to deflate the occasion. There was a record turnout of 545 entrants on a sunny Easter Saturday for the fifth Kilmovee 10k run and walk. This was the first event in Mayo AC's 2014 Move 2 Improve six race series, which is open to all entrants. It was excellently organised by Kilmovee Shamrocks GAA club and the local community in aid of Mayo/Roscommon Hospice. Ironman athlete Gerry Duffy was a guest and said: “It was the most friendly race I've ever been at, a fantastic event, testament to John Roddy's leadership and the involvement of the whole Kilmovee Community team.” The big field was well streamed out as they crossed over Aghadiffen Bridge into Roscommon after the 3k mark. Matt Bidwell, Roger Barrett, last year's winner Con Marshall, and Aidan Callaghan were in the lead group, with John Byrne - recovering from his PB run at last Sunday's Rotterdam marathon - and Timmie Glavey further back.

Big turn out at Charlestown 10k

September in the rain marked the second running of the Charlestown 10k on Saturday evening. The recent good weather turned colder, wetter, and breezier, but the rain held off during the race and conditions were good for running. Christina Duffy and her team, assisted by John Roddy, put on another enjoyable and impressively organised event. They provided an excellent well marked and marshalled course all the way from the starting line at Lowpark to refreshment tables in the CBD sports complex, for which the race acted as a fund raiser. John Byrne, John Mannion, and Paul Conlon led David Tiernan out of town, as the field headed for Cloonaweema. Jonathon Deane, Thomas Kelly, Brendan Gill, and Anto Devaney kept them in view until they crossed over to the old Dublin road at halfway near Gowel. By then Byrne had a few metres on Mannion, with Tiernan and Conlon together over a minute behind. Ann Lennon had John Nolan for company as she had in Balla 10k and Claremorris four mile the previous week. John Byrne stretched his lead gradually from 6k and crossed the line in 32.32, a new course record, to record his first league race win since 2011. “I thought I’d never see that time again”, he said afterwards. This marks a brilliant return to form for Byrne, who has been at the forefront of Mayo athletics for over 15 years. Mannion finished second in 34.10 with Tiernan third in 34:51, a new PB and beating his 2012 winning time by over a minute. Ann Lennon 37:47 – a brilliant performance by the National W45 half marathon champion, and Colette Tuohy in 39:20 finished first and second in the women’s category. Standards were high, with more than double the number finishing in under 40 minutes compared to 2012. There were a number of PBs joyfully celebrated at the finish line. The road League continues in east Mayo in less than three weeks with the Ballyhaunis 8k on September 28, followed a week later by the final race, Breaffy 10k on October 6.

Charlestown 10k takes to the roads next week

The Charlestown 10k will be the fourth race in Mayo AC C&C Cellular 2013 Road League. It takes place at 5pm on Saturday September 7 and will be the first big race of the month in the west. Charlestown is an excellent location on the N5/N17 and easily accessible from all points in the province. The organisers are hoping for a big turnout and their local hero David Tiernan, who runs with Mayo AC, will be heading the challenge. All are welcome to join and run, jog, or walk.