Gridwest row continues to rumble on

Taoiseach to state his position on pylon controversy

An Taoiseach Enda Kenny is expected to clarify next week his position on controversial plans to erect giant pylons and overground 400 kV lines across the landscape of north and east Mayo.

Ballina Town look for round seven spot in junior cup

Ballina Town will host East Wall Bessborough in the sixth round of the FAI Junior Cup in Belleek on Sunday afternoon. The Dublin based visitors are currently sitting in seventh spot in the 12 strong AUL Premier A table, 10 points off table toppers Kilbarrack United. The league leaders saw off East Wall Bessborough 3-1 last Sunday and Ballina will be hoping they can grab a similar win on Sunday.

EirGrid has announced the emerging preferred route corridor for the Grid West project. The chosen 1km wide corridor, which will accommodate a new power line, starts north west of Moygownagh, runs west of Ballina, east of Foxford and Swinford, south of Charlestown and Ballaghaderreen before linking into the existing Flagford substation, near Carrick-on-Shannon.

No room left for error this weekend in final group games

The second weekend in July is where the hopes and dreams will end for eight teams in both the Mayo senior and intermediate football championships. For those who finish bottom of their groups, the task of dragging themselves back up for a relegation fight lies in store, while those who find themselves in the no-man’s land of third place in their groups will at least know they will be back to have another crack at it next year. In the senior championship this weekend, everything is up for grabs. In group one Castlebar Mitchels are leading the pack with two wins from two, while Breaffy and Crossmolina are both on two points, with the west Mayo men in front on head to head results and Davitts taking up the rear. The county town team will host Crossmolina on Saturday evening, and it is very hard to see anything but a home win for Pat Holmes' side, who put Breaffy to the sword last time out and a serious dent in the blues’ title ambitions. The other game in the group sees Declan Reilly's Breaffy make the tough trip to the borderline to take on Pete Warran's Davitts. This time last year both sides also met in the group stages, with Davitts winning out and sending Breaffy into the relegation play-offs. Apart from the Castlebar game, Breaffy have looked very impressive this year seeing off Ballintubber, Ballina, and Castlebar in the league, and Crossmolina in the opening championship game. They go into the game knowing that a win should see them through, unless Crossmolina better Breaffy’s win by at least six points in beating Castlebar. But getting that win is a big if, and Breaffy know they will have to be on top form on Saturday evening to make that happen. Davitts named Michael Conroy in their squad for their last championship game and if the Mayo sharpshooter is fit to play, he will be a massive boost to Davitts’ chances on Saturday evening. It promises to be a tough and uncompromising battle and if Breaffy do make it through, it will serve them well for later on this summer.

Mayo prepare for Roscommon challenge with victory over Cavan 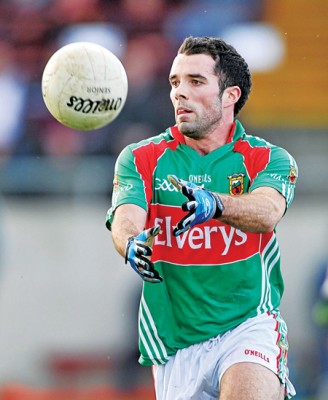 With time ticking down to next Sunday’s Connacht semi-final against Roscommon in McHale Park, James Horan and his managment team took the chance of last Monday’s challenge game with Cavan in James Stephens Park to run the rule over a number of fringe contenders for a place in next Sunday’s side. Kenneth O’Malley in goal with Kevin Keane, Shane McHale, and James Burke were all given chances to impress in the defence, while Jason Gibbons put in a good shift, especially in the second half while partnering Aidan O’Shea in midfield. In attack Richie Feeney stepped into the number 11 shirt vacated by Cillian O’Connor because of his shoulder injury, while Darren Coen started at corner forward with Andy Moran in the other. The Ballaghaderreen man got some good game time under his belt in his battle to get back to full match fitness as soon as possible.

Walk in memory of a loved one on Memorial Walk Sunday

A series of memorial walks is due to take place across Mayo and Roscommon on Sunday July 14 in memory of friends and loved ones who are no longer with us. The event is being organised by Mayo Roscommon Hospice and Kavanagh’s SuperValu as part of the ongoing Help us to Help Others Campaign. These walks will bring people of all ages and from all walks of life together to remember that special someone and celebrate his/her life by walking in his/her memory. All are welcome to join in this event.

Walk in memory of a loved one on Memorial Walk Sunday

A series of memorial walks is due to take place across Mayo and Roscommon on Sunday July 14 in memory of friends and loved ones who are no longer with us. The event is being organised by Mayo Roscommon Hospice and Kavanagh’s SuperValu as part of the ongoing Help us to Help Others Campaign.