In the second race of the Galway 5km series held in Craughwell, husband and wife team TJ McHugh and Catherine Conway finished first in the men’s and women’s race. TJ finished in first place with a time of 16.25, just ahead of Timmy Glavey also of Mayo AC with Jason Broderick of Craughwell AC back in third. In the ladies’ race Catherine finished well ahead of Stephine Fahy from Tuam in second place.

Sally Rose Maughan, a member of Castlebar AC, jumped longer than the qualifying level of 5m 80 for the Long Jump event at the European Youth Olympic trials when she competed at the Leevale AC open sports in Cork recently. Her jump of 5m 86 is well inside the qualifying standard for the European trials and sees her eligible for selection as part of the Irish Youth team for the event. The trials will take place in Moscow, Russia on May 21 to 23. A European team will be selected from these trials to compete at the World Youth Olympic games to be held in Singapore in August. Sally also won gold in the individual long jump and 300m events and silver in the 60m sprint - in a personal best of 7.95 seconds - at the National Juvenile Indoor Athletics Championships held in Nenagh recently.

Mayo athletic club has announced its teams for the upcoming national 10k which is being held this year in conjunction with the Bupa Great Ireland Run 2010 this Sunday April 18 in the Phoenix Park, Dublin. The senior men’s team comprises Timmy Glavey and Andrew Lynskey. Mayo will be sending a six strong women’s team, with Breege Blehein McHale, Catherine Conway, Tracy Durkan, Mary Gleeson, Paula Prendergast, and Sarah Syron making it up. In the over 35 section, the men’s team will be led by John Byrne along with Gerry Galvin, David Huane, Robert Malseed, TJ McHugh, and Christy O’Malley. The women’s over 35 team comprises Cathy Connolly, Anne Fahey, Chris Gallagher, Ann Lennon, Ann Murray, and Angela O’Connor. Mayo AC will have a very strong representation in the over 50s men’s section with a seven strong team of veterans, made up of Mickey Ferry, Jim Gaughan, Tom Hunt, Owen Mongan, Patrick Moran, and Chris O’Connell.

The annual general meeting of Mayo AC will be held in the Beaten Path tonight, Friday March 19. The meeting will start at 8.30pm, however, Mayo AC committee members will be on hand from 8pm to collect 2010 membership subscriptions. It is important that as many members as possible attend to contribute, discuss, and decide plans for 2010, and ensure a wide range of activities is organised.

Westport 5K to finally bring curtain down on 2009 season

After two cancellations due to weather conditions, the ninth and final race of the 2009 Vodafone C&C Cellular Mayo Road Race League takes place in Westport on Sunday February 7, starting at 2pm. Participants are strongly advised to allow sufficient time to travel to the race as there is a football match at Castlebar on that day. 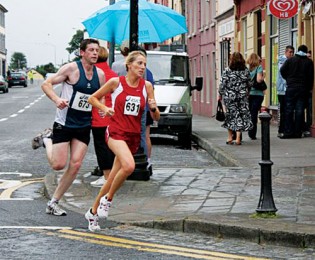 There was a good atmosphere on the streets of Swinford on Sunday for the annual road race. Swinford AC organised the fourth race in the 2008 Mayo Road Race League and provided a warm welcome for the participants in the 8k and the children's race which preceded it. Joe McNulty and his team of enthusiastic supporters in this young and successful club made sure the event was a huge success. The streets in the start and finish areas were cordoned off and traffic free, which enhanced the safety and enjoyment of all. This race has gained in popularity and stature and is now a key event in the Western athletics calendar. The main race had over 130 runners from 20-plus athletics clubs.

Half marathon success for Mayo

The AAI National Half Marathon Championships were hosted by Waterford AC at their magnificent base at the Regional Sports centre on Sunday morning. The sun shone, the sky was blue, and the whole county was bedecked in blue and white in a frenzy of anticipation for the hurling final later in the day. Sadly, the white heat of Kilkenny blew them away and the “blues” of disappointment awaited them.. a feeling we know so well.