The Mayo Schools' Debating Competition, organised by Mayo Association Dublin, sponsored by MAYO.ie and in association with Bank of Ireland, held its Grand Final in Trinity College Dublin on Saturday last. The motion for debate was "That this house is against independence for Catalonia’, which produced a lively debate, with speeches of exceptional ability on both sides.

The competition is under the patronage of Dr. Mary Robinson. The final was hosted by the College Historical Society, 'the Hist', which is the oldest student debating society in the world. The debate was judged by a panel chaired by Judge Mary Laffoy and which also included Mr Pat Rabbitte, Dr Carmel Heaney, Mr Padraic Lyons, BL and Mr Iarla Mongey.

After the debate, the panel of adjudicators withdrew to make their decison and after long consideration the panel declared the team winners to be Elijah Burke and Simeon Burke of Burke Home School, Castlebar and the winning speaker being Tom Baynes of St Gerald’s College, Castlebar. 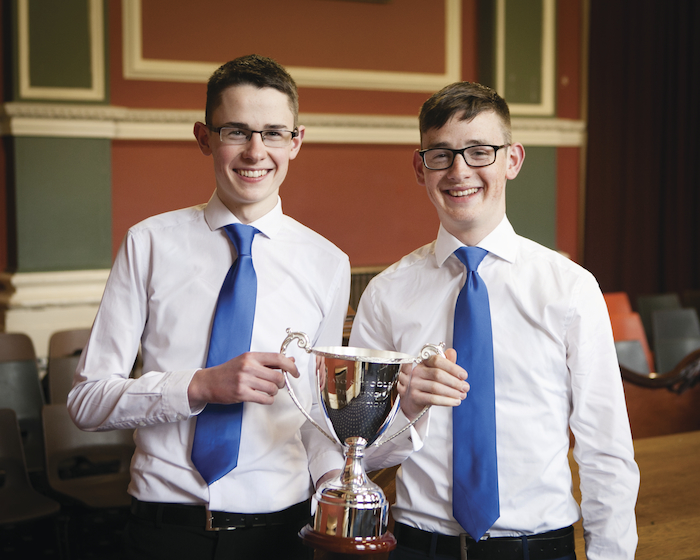 Judge Laffoy presented the winners with their prizes. Judge Mary Laffoy paid tribute to all the speakers for the high standard of the contributions. She also praised the competition and stated that she hoped it would be held again in the future.

Julie Doyle, Chairperson of Mayo Association Dublin, says, "The standard of debate in the final was extremely high and the students performed brilliantly. The competition has been a great success and it has achieved its objective of helping young Mayo people to prepare for the leadership roles they will play in the future. We congratulate the winning team and winning individual speaker but the list of winners include all the students who took part at every stage of the competition. This competition will be held again next year and we expect even more schools to be involved.

"We are grateful to our sponsors, MAYO.ie and Bank of Ireland, and to GMIT Castlebar for all their support, and to the students, teachers, parents and adjudicators whose hard work and commitment has made the competition such a success."