Mayo started and finished with a bang in Croke Park on Saturday night as the claimed the Nicky Rackard Cup at the first time of asking. At times it looked like it was going away from them in the early stages of the second half, but JP Coen’s men gutted it out and ran out deserved four point winners.

Kenny Feeney was the man who turned the screw for Mayo when it really counted down the home stretch, but the impact that Fergal Boland made after coming off the bench with 42 minutes gone has take equal billing. The Tooreen man finished with two points from play before the full time whistle and added a second All Ireland medal to his haul for the year after being part of the successful u21 footballers who claimed national honours earlier in the year.

But when Mayo needed a man to stand up show the composure needed on the big day Feeney was the man. With 14 minutes left on the clock Feeney went between two Armagh defenders and broke a high ball from Cathal Freeman down to himself, he showed composure to collect the ball and drive it low past Simon Doherty to put Mayo into a 2-11 to 1-11 lead.

The Orchard county fought back and with five minutes left on the clock they had pulled themselves level once more. But Feeney wasn’t going to let it slip for Mayo, he took a heavy bump out near the Cusack Stand behind the 65 meter line and after receiving some treatment he arrowed the ball over the bar from the resulting free to edge Mayo back in front. Ryan Gaffney squared it up once more from a soft free given away by an over eager Mayo defence on 67 minutes and extra time looked on the cards. 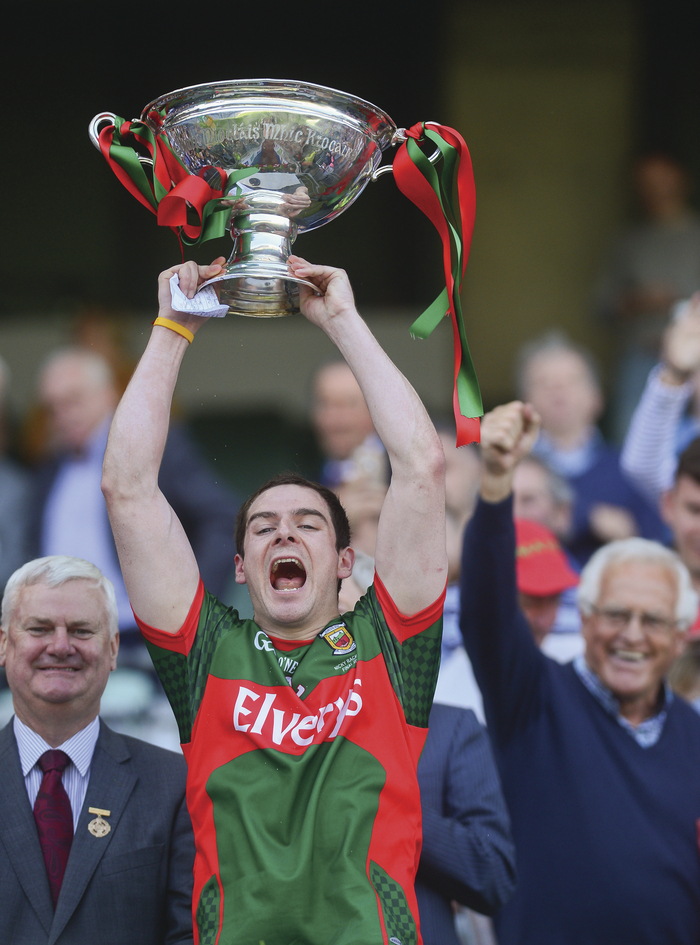 Mayo weren’t for moving though and following some hard work by Sean Regan down the right flank, Feeney eased the ball between the posts from near the sideline to put Mayo back into a slender lead. Feeney returned the favour to Regan less than a minute later and Mayo were two clear and a sucker goal from Armagh could have killed them, but it wasn’t going to happen. Feeney rifled over another pointed free, to take his tally to 1-9 for the day and deep in injury time Corey Scahill made it safe with a point from well out the park to see the game to put Mayo four clear and get the celebrations started.

Mayo got off to a flyer when Darren McTigue found the back of the Armagh net two minutes into the game. The Castlebar stickman got on the end of a flying move up the left flank that saw him react quickest when Shane Boland’s goal effort was saved well by the Armagh keeper and he swept the sliothar to the back of the net form close range.

With ten minutes gone on the clock Fenney hit his first point of the day to keep Mayo three clear after David Carvill had landed Aramagh’s first point of the day. Not long after Cathal Freeman hit powerful shot that came off the angle of post and bar, which could have given Mayo their second goal. Armagh hit the next two scores thanks to Cahal Carvill and Declan Coulter, but their wide count was ticking up all the time two. The hit nine wides in the first half and ultimately lived to regret this later on down the tracks. Joe McManus kept the Mayo scoreboard ticking with a well taken score and Feeney stretched the Mayo lead out to three again with free he eased over the bar from the right hand side. Sean Regan put Mayo four clear on the 20 minute mark, but Armagh were about to have a little purple patch where they outscored Mayo by 0-6 to 0-2 over the closing stages of the first half to send the sides in level at 1-6 to 0-9 at the short whistle.

Armagh carried that good form into the start of the second half and they hit the back of the net with less than 90 seconds of it gone. After cutting out a promising Mayo attack, they worked the ball with speed down the field and Adam Toal was on hand to apply the finish after Declan Coulter had done the heavy lifting before hand. Mayo pulled themselves level by the 44th minute thanks to scores from Shane Boland, Feeney and Fergal Boland within seconds of his introduction from the bench. Armagh were having lots of possession but failing to convert it into scores and Mayo were making the most of what came their way in attack and when the chance presented itself to Feeney to hit the back of the net he wasn’t found wanting and from them on in the momentum and the contest was with Mayo.

This Nicky Rackard win is a stepping stone back to where they want to be, back in the Christy Ring Cup, but they have one more hurdle to overcome when they take on Derry in the promotion/relegation play-off next weekend for the right to compete in the second tier next year. But for now it’s Mayo’s day and they’ll worry about next week on Monday morning.