Kerry were clinical and Mayo were not and that’s where this game was won and lost. Mayo had 27 chances from play and only took ten of them, they also missed a couple form placed balls and you’re not going to win a game with that kind of return.

For long parts of this game Mayo did plenty right, they were tigerish in defence and didn’t give Kerry much scope to punish them on the scoreboard.

Paul Geaney should have rattled the back of the net early on and David Clifford did with a breathtaking finish - but for the most part Mayo were breaking at least even and holding their own - just when it came to the final act in front of the posts, they fluffed their lines far too often.

With 48 minutes gone James Carr cut in from the Hogan Stand side and curled over a great score to leave just one between the teams with Kerry leading 1-10 to 0-12 - but the push Mayo needed never materialised on the scoreboard and Kerry hit seven points on the spin as Mayo saw the efforts fly wide and drop short of the target.

The game started in downpour of rain and the crowed which had thinned out dramatically after the end of the previous game never really got engaged and was providing a low murmur of noice in the background.

Cillian O’Connor opened the scoring with a free inside a minute - before David Clifford and Gavin White pointed for Kerry. Then Conor Loftus and Aidan O’Shea landed two top class points to push Mayo back in front.

Just after the ten minute mark, Paul Geaney got in down the left hand side and really should have finished to the net - but he pulled his effort wide of the post on the near side. Kerry did hit the next three scores through Tom O’Sullivan, Clifford and Sean O’Shea to go two clear.

Mayo kept pace with O’Connor slinging one one from play and Rob Hennelly hammering over a free into the Hill with Geaney pushing his side back in front not long after.

Jack Carney and Stephen Coen pushed Mayo in front with well taken efforts on 27 minutes - but the next score was crucial. Despite picking up an injury earlier that looked like it could curtail his efforts, David Clifford picked up the ball and drove in from the Cusack Stand side and fired home a fine goal to put Kerry two clear and not long after that Aidan O’Shea was shown a black card after a tussle with Clifford in the middle of the park.

O’Connor did respond for Mayo from a free close in, before David Moran got his first of the day to keep Kerry ticking over. Right at the end of the first half the only goal chance that Mayo cerated for the day emerged and Kevin McLoughlin was played in after some good work by Jordan Flynn and the O’Connor brothers - but his effort went over the bar.

But that still kept Mayo in touch and just one point behind at the break and it all seemingly to play for. Mayo kept creating chances after the restart but their return column was seriously lacking for that effort. 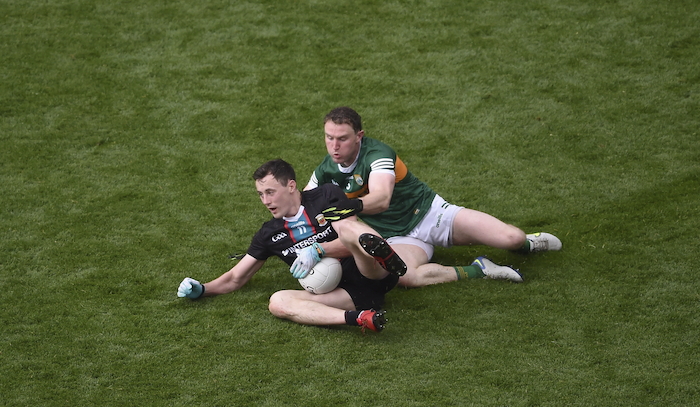 Sliding in: Diamruid O'Connor slides in to win the ball against Kerry. Photo: Sportsfile

Tom O’Sullivan got another point for Kerry down the right hand side to push the Kingdom two clear, Jordan Flynn responded before another Kerry defender Graham O’Sullivan got in on the scoring act.

Matthew Ruane and Clifford traded points before Carr’s score that looked like to was going to kick the game up another gear - but it was Kerry who went into fifth gear and Mayo were stuck in third and not able to drive on for home as Kerry hit the accelerator in terms of scoring return and Mayo were stuck in traffic. Jack O’Connor’s side rolled over point after point to put themselves well into the lead and cruising into a semi-final with Dublin in a fortnights time.

For Mayo a long few months lie ahead, before things come back together early next year and another air of optimism will settle on the county with the January frost.