It’s never ordinary with Mayo. They won and are in the second round of the qualifiers, but it could very easily have been different if referee Barry Cassidy had decided to give Monaghan a penalty in injury time when Conor Lenonard looked to have been fouled after he intercepted a poor ball back to Lee Keegan, by Aidan O’Shea.

But the Gods were with Mayo and Cassidy waved play on and Mayo were able to get the insurance score from Paddy Durcan to see themselves home by four points and into the round two pot for the draw on Monday morning.

After a sluggish start by Mayo who found themselves two down thanks to a brace of Gary Mohan scores in the opening few minutes, they made having a man advantage count after Conor McManus was shown a black card for a trip on Aidan O’Shea.

Cillian O’Connor tapped over the resulting free and Eoghan McLaughlin levelled it up following some good work by Oisin Mullin. On 11 minutes Mayo created a goal chance that fell to Monaghan, but his effort in the eyes of the referee was blocked illegally by a foot block from a Monaghan defender and a spot kick awarded.

O’Connor stepped up and drove the ball high to the roof of the net and Mayo were three clear, the Ballintubber man put Mayo four clear from another free after James Carr and then Rob Hennelly stroked over a long rage free to have Mayo 1-4 to 0-2 as McManus got back on the field and restored Monaghan to the full complement.

Jack McCarron who was the Ulster sides most influential man all afternoon, got their third point of the game from a mark to get his side back moving once they were back to 15 players. 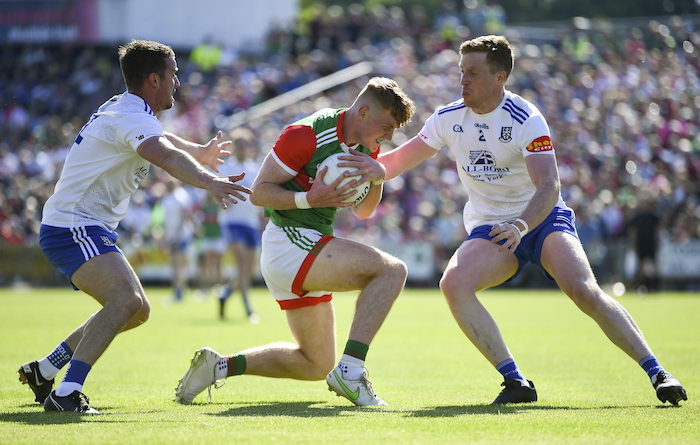 Jack Carney sold a dummy to create some space and fire over Mayo’s fifth point which was quickly responded to by a duo of McCarron points, then O’Connor and McManus traded pointed frees to send Mayo in at the break leading 1-7 to 0-7.

O’Connor put them four out in front early in the second half - but Mayo went another 20 minutes without scoring, but Monaghan had their troubles too, only getting two points back during that fallow period on the score sheet for Mayo.

Lee Keegan as he has many times before took control of the situation and drove over a fine point from distance to rouse the Mayo faithful in the 16,000 strong crowd, that was followed by another O’Connor score and Mayo were looking good.

But Monaghan weren’t going to go away, Shane Carey replaced McManus and tapped over a free to close the gap back to three with six minutes left. Mayo responded in kind though Darren McHale and O’Connor and looked to have the game won again.

Conor Leonard brought it back to a four point game on the stroke of full time and then Carey made it a three pointer from another free.

Mayo were living dangerously and were lucky to escape the late penalty shout, but they did and they move on to round two and live to fight another day - with a summer of promise still alive and intact.