It was first blood of 2022 for Galway in the old rivalry out west as Pádraic Joyce’s men edged out Mayo by three points in the Connacht GAA AirDome in Bekan on Friday night.

James Horan put out an experimental team in his sides first outing since last years All Ireland final defeat to Tyrone last September.

Getting their chances to impress were the likes of Donnacha McHugh, Sam Callinan, Frank Irwin, Jack Mahon, Justin Healy and Fionnan Duffy - in front of a 300 strong crowd under the covers in east Mayo.

Mayo started brightly with Fergal Boland and Sam Callinan getting early scores to get the game going, but impressive and hard working Galway side led by Damien Comer who was covering every blade of synthetic grass worked their way back into the game.

Points from Comer and Robert Finnerty had the game level after five minutes, before the first of four Duffy frees edged Mayo back in front.

The hosting county were reduced to 14 players for ten minutes when Padraig O’Hora was shown a black card ten minutes in and from there to the water-break Galway tagged on three points from Dessie Connelly, Johnny Heaney and Comer to go in leading 0-5 to 0-3 at mini-break.

It could have been worse for Mayo had Cormac McWalter found the back of the net, after he had been played in behind the cover - but some quick feet from Rory Byrne narrowed the angle and he pulled his effort wide of the target. 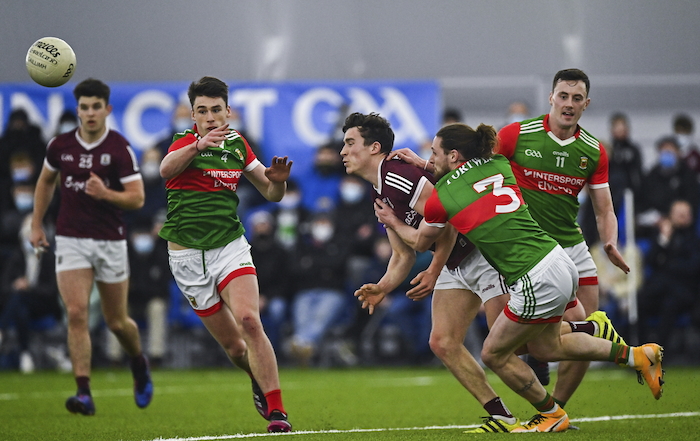 Finnian Ó Laoí of Galway is tackled by Padraig O’Hora of Mayo during the Connacht FBD League semi-final match between Mayo and Galway at the NUI Galway Connacht GAA Air Dome in Bekan, Mayo. Photo by Eóin Noonan/Sportsfile

Frank Irwin pulled put a point between the sides with a well taken effort not long after the restart, before Matthew Tierney showed why he is one of the best dead ball strikers around driving over a 45 with the minimum of fuss.

Duffy kept Mayo in touch with his second free of the day, before Paul Conroy showed all his experience to reel off two on the bounce for Galway.

Two more Duffy pointed frees kept the Mayo scoreboard moving before the end of the half, but Galway responded to both of those with Finnerty and Conroy pointing to send their side in leading 0-10 to 0-7 at the half-time turn around.

Mayo introduced Ryan O’Donoghue at break and the Belmullet man looked for a long time in the second half that he could swing the game in Mayo’s favour hitting five points in the second half - but Galway were always able to keep their noses in front as both sides made a raft of substations over the final 35 minutes.

A lovely long range effort from Fergal Boland just before the second water break made it a one point game at 0-12 to 0-13, but it was Galway who finished the strongest with Shane Walsh having a major impact not long after coming on, kicking a handful of points as Joyce’s men drove for the finish line winning out by four points and booking a spot in the final of the competition next weekend.