This one will sting, more so than the other recent defeats in the concrete caldron on Jones Road on the biggest day of all.

Croke Park can be a unforgiving place and it was unforgiving for Mayo who had to lick their wounds once more on a September evening, as Tyrone claimed their fourth All Ireland title and Mayo’s dreams once more turned into nightmares on the biggest day of the year.

Mayo had their chances; they had an amount of goal chances but they couldn’t find the net with any of them, while Tyrone stuck two second half goals into the Hill 16 end that ultimately decided the outcome of this contest.

Mayo’s execution and decision making abandoned them, when they needed it most - with poor choices of passing, execution of shots and not being able to deal with Niall Morgan’s long range raking kick-outs that cleared the midfield sector all playing major parts in their downfall.

Going into it, nobody was really sure how it would go - Mayo had finally got over Dublin, but it was at the semi-final stage rather than the final. Tyrone came through Ulster the hard way and saw off Kerry after extra time, whoever held their nerve was going to win it and it was the Ulster side who held theirs better and saw Mayo off.

It all started well for Mayo, Aidan O’Shea won the throw in and found Tommy Conroy who drove at goal and pointed, four minutes later Ryan O’Donoghue opened his account with a tight free after Kevin McLouglin was fouled. Their lead would last seven minutes and from then on they were always chasing the game. 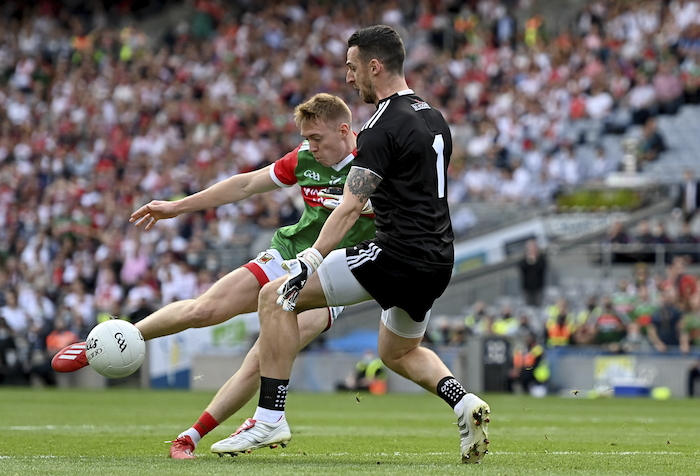 No way through: Bryan Walsh has his effort for a goal saved by Niall Morgan. Photo: Sportsfile

Niall Morgan drove a free over the bar to get Tyrone moving after Micheal Plunkett fouled Kieran McGeary, then Padraig Hamspey slotted over one with the outside of his boot and they were humming. Darren McCurry slotted over a free after a slack foul by Mayo and Tyrone had their noses in front for the first time.

Ten minutes in Mayo really should have hit the back of the net when their first goal chance arrived, Brian Walsh got in on the end of a looping move but his initial effort lacked the power and then on the rebound Conor Loftus failed to finish from close range.

Ryan O’Donoghue cut through to level it up a few seconds later, but Tyrone went right back down par and a long kick-out was worked to McCurry who made no mistake, that sent Tyrone in leading 0-4 to 0-3 at the first water break.

Mayo pulled themselves level through another O’Donoghue free after Conroy had been fouled not he bounce, but Tyrone just kept edging their noses in front and Kieran McGeary put the ball over at the end of a move that saw Niall Morgan hold to the ball for a long period in the build up.

Mayo were hanging in their and Paddy Durcan swept over a point from the right to level it up at five points each - Mayo should have had another great goal chance when Stephen Coen found Aidan O’Shea inside the cover put his effort was brilliantly blocked by a Tyrone defender.

From the next play Niall Sludden, pointed then Mattie Donnelly and Darren McCurry got in for a goal chance but Hennelly did well to get down and save low and put it out for a 45 which was converted by Morgan and Tyrone were three up.

O’Donoghue kept Mayo in touch with another free from a sticky position, but McCurry responded in kind - before a Sludden point was sandwiched between scores from Stephen Coen and O’Donoghue to send Mayo in trailing 0-10 to 0-8 at the half time break.

Mayo had two great goal chances right in the opening exchanges in the second half, Tommy Conroy burst through down the Cusack Stand side of the field and let fly low but pulled his effort wide of the target - and on 40 minutes Mayo got a penalty.

A free from O’Donoghue from a tight angle dropped short and in the ensuing battle for the ball Frank Burns picked it up off the line and the spot kick was awarded. Up stepped O’Donoghue and he pulled his effort high and wide to the right, clipping the outside of the post on its way. 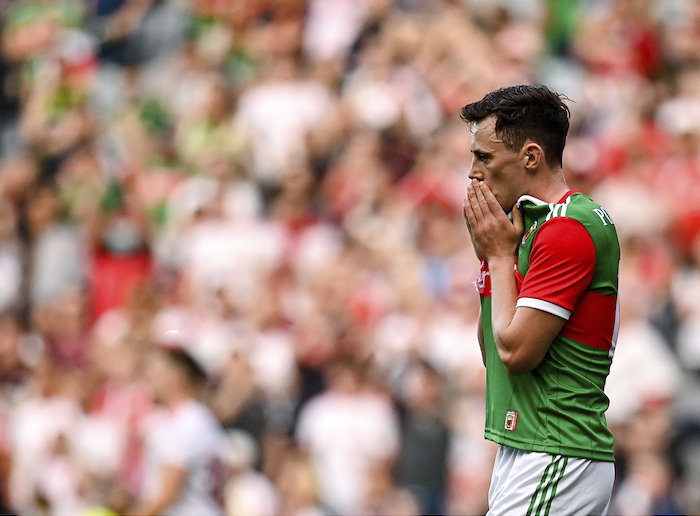 Another hard one to take: Diarmuid O'Connor reacts after the full time whistle. Photo: Sportsfile

Mayo did register the next score when Hennelly drove over a long range free from 60 meters but the next score was going to be the crucial one. Hampsey found Conor Myler out on the Hogan Stand side of the field, he dropped the ball on top of Cathal McShane who had just come on and he got his fist to the ball to flick it past the advancing Hennelly after he’d got away from Oisin Mullin.

O’Donoghue did kick another point for Mayo from a free after Diarmuid O’Connor was fouled to cut the gap to three points at the second water break and leave Mayo still very much in the game, but it was going to be an uphill task against a well primed Tyrone outfit.

Kevin McLoughlin landed a point after a strong run from Stephen Coen - but the next score was the killer one. Conn Kilpatrick field a monster of a Morgan kick-out on the the Mayo 45m line and he fed McKenna who drew in the defenders before flicking it across to Darren McCurry who palmed home and that was it - Tyrone were on the up and Mayo were getting desperate and while they did get it back to a three point game with six minutes left in normal time, they missed a number of chances for scores and each one gave more and more oxygen to the the Ulster champions who saw it out and won by five points at the end.

For Mayo the quest goes on, they’ll go away and lick their wounds over the Winter and come back again for another go around next year, it’s what they do and they’ll hit the field next Spring with the same drive and verve as they always have, they know no different. And will be planning to be back on the big day once more.