The classical western contest upped sticks and headed to the big city for one day only and while it may have been played out on fancier turf than the old sod from home, it still had that old familiar feeling from days gone by in the old shed in Tuam Stadium and the memories from MacHale Park.

And for the 44th instalment of the Mayo v Galway rivalry in the provincial showpiece the victory went to the men in green and red - something that didn’t look very likely when the half-time whistle was blown and Galway headed in to the break, via another local quarrel in the tunnel five points to the good.

The second half was something very different from what had gone before. Galway went from footloose and fancy free at the tail end of the first half, to forlorn and frustrated by the final whistle.

James Horan made two decisive changes at the half-time break, out went Bryan Walsh and Darren McHale from a Mayo attack that wasn’t quite firing right and in came Kevin McLoughlin and Eoghan McLaughlin.

McLaughlin’s driving running style and McLoughlin’s guile and experience proved crucial in turning the game back in Mayo’s favour. Just after the resumption the Knockmore man collected a pass from Mattie Ruane and drove a pinpoint pass into arms of Aidan O’Shea who had been posted on the edge of the square, he found Ruane who continued his run and was hauled to the ground inside the penalty area and a spot kick was awarded. 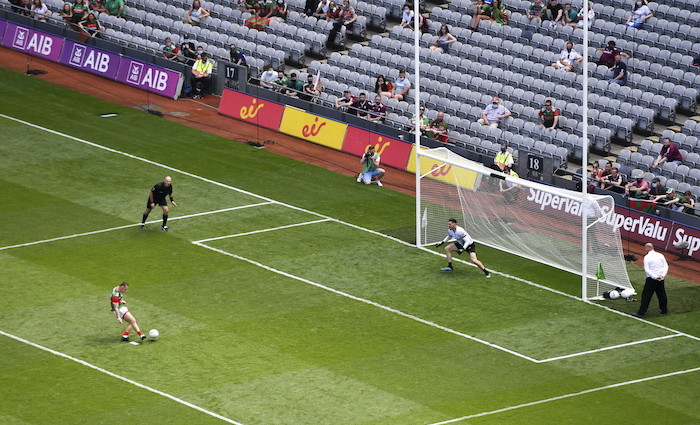 Roll it in Ryan: Ryan O'Donoghe slots home the ball from the penalty spot. Photo: Sportsfile

Up stepped Ryan O’Donoghue who dispatched it with aplomb to the back of the net and got Mayo right back into the game. Tommy Conroy who had a first half that wasn’t up to his usual high standards burst by a few tackles and shot over to cut the gap to a single point and Mayo were motoring, while Galway were starting to take In water. Mayo hauled themselves level through a long range effort from Ruane 47 minutes in and two minutes later Kevin McLoughlin tipped toed his way into some space and slotted over to put Mayo into a lead they never looked back from. O’Donoghue tapped over a free just before the second water break to send Mayo into it leading by two - but almost more importantly they had wrestled control of the game back from Galway and were on top in every area.

Early points after the restart from Conroy and Conor Loftus stretched Mayo’s lead to four, with nine minutes left in normal time Galway registered their first score of the second half through a Tierney free and he added a second one four minutes later to give Galway a slim chance to get back into the game - but it was quickly extinguished by Ruane, who was allowed to waltz through the Galway defence at his ease, despite looking like he had lost control of the ball on more than one occasion and slot the ball under the legs of Conor Gleeson. Eoghan McLaughlin had a chance straight after to put a third goal past the Dunmore man - but Gleeson got a toe to it to send it out for the 45. Rob Hennelly stepped up to drill the resulting 45 over the bar to keep scoreboard moving for Mayo. Tierney did tag on one more point for Galway before the end and James Carr also had time to decide to kick the ball over the bar rather than go for goal for Mayo to round off the scoring. 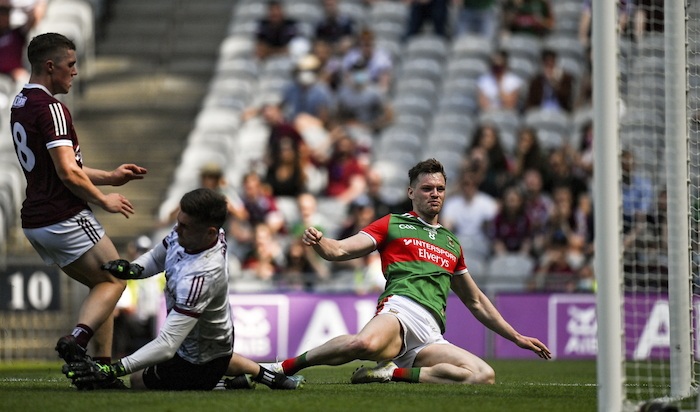 Galway had led by five at the break thanks to goals from their two key men Shane Walsh and Damien Comer. Walsh rattled the back of the Mayo net 19 minutes in when he was the quickest man to react to Paul Conroy’s effort for a point that came back off the post. That score put Galway into the lead for the first time on a score of 1-3 to 0-4 and six minutes later he burnt Aidan O’Shea and Paddy Durcan for pace down the Hogan Stand side of the field and found Comer who drove the ball powerfully to the back of the net.

The game had began well for Mayo with Matthew Ruane and Ryan O’Donoghue putting them into an early two point lead. Galway had the game levelled up by the eighth minute thanks to scores from Walsh and Conroy. But a brace of Mayo scores through a typical Paddy Durcan effort and O’Donoghue close range free put Mayo back in front by two again. Conroy cut the gap back to one before the first water break as the game was starting to find it’s feet.

The second quarter was all about Galway with Walsh’s goal coming just resumption of hostilities and on 22 minutes Comer’s three pointer put his side into a 2-3 to 0-5 lead. Darren McHale’s point stemmed the tied for Mayo, before Cathal Sweeney fisted over his sides fourth point of the day that put Galway into a four point lead. Conor Loftus should have rattled the back of the net for Mayo in injury time, but his effort flew off the bar for Mayo’s sixth point and there was still time for Matthew Tierney to fire over a long range point and for a Peter Cooke effort to be ruled out by Hawkeye before the half-time whistle went and Galway went in at the break looking good leading 2-5 to 0-6. But this was a story that was only half told at this stage.