Mayo waltzed into the Connacht Senior Football Championship final without having to break a sweat against Leitrim in MacHale Park on Sunday afternoon.

For the fifth time in the six games they have played this season they past the 20 point marker and on this occasion only three of the points they hit came from placed balls.

Mayo were overwhelming favourites before the game and even dealing with the covid issues that had effected the camp they backed the favourites tag up.

When the game had to be won in the opening exchanges they, hit Leitrim hard in the tackle and turned them over numerous times and helped themselves to eight points before the first water break was called.

Leitrim thought they had taken the lead inside the opening minute when Shane Moran hit an effort that drifted just wide - but from then on it was all Mayo. 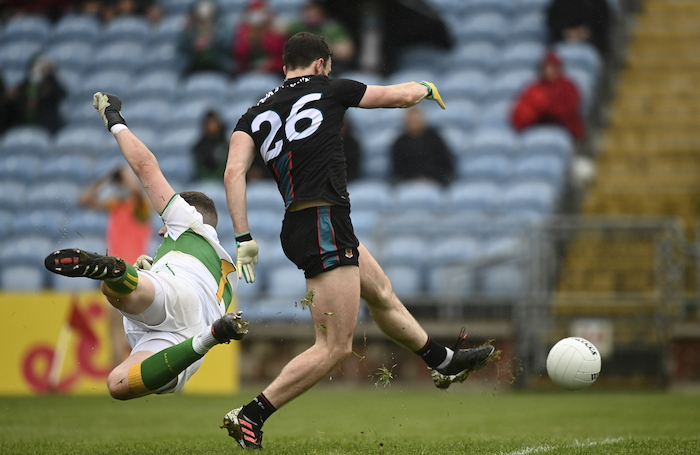 Tommy Conroy opened Mayo’s account cutting in from the left, then Matthew Ruane pointed after Darren Coen had turned over a Leitrim player in the middle of the part. Ryan O’Donoghue could have bagged Mayo’s first goal of the day after he was played in by Ruane but Brendan Flynn saved well.

Mayo continued to press home their advantage on the scoreboard with Conroy tagging on two more points, Stephen Coen popping up to drop one over Ryan O’Donoghue opening his accounts and Ruane getting his second - before Keith Beirne got Leitrim’s first of the day right before the first water break - which Mayo went in leading 0-8 to 0-1.

The game was completely killed off as a contest in the second quarter when Mayo hit the back of the net three times.

Darren Coen was the first to land a three pointer - Conor Loftus aimed a pass to the Hollymount-Carramore man and the ball was deflected into his path, he rounded Flynn and hammered the ball home.

Knockmore’s Darren McHale then bagged two goals for himself inside of 60 seconds, the first when he applied a deft flick to the send the ball home after Paddy Durcan and Oisin Mullin had cut a hole right through the heart of the Leitrim defence.

Then he picked up a ball that broke off Conroy and wasted no time in hammering the ball home from close range for Mayo’s third.

Mayo also registered points from Darren Coen and Conor Loftus who hit long range efforts and Ryan O’Donoghue getting the other score to send their side in leading 3-11 to 0-4 at the half-time break. Travelling on: Tommy Conroy breaks for goal for Mayo against Leitrim. Photo: Sportsfile

The second half was an exercise in seeing the game out and not picking up any injuries for Mayo and they helped themselves to two more goals in the third quarter - with O’Donoghe hammering the ball home after being picked out by a great ball from Jordan Flynn and Conroy getting one for himself after Darren Coen slipped a little hand pass in behind the Leitrim defence.

Having had to deal with the upheaval that occurred during the week due to Covid issues, James Horan will be happy with how his sides preformed on the day - but he’ll hope that those issues clear up as quick as they can before the face Galway in the Connacht final in two weeks time.