With both sides through to the semi-finals the threat was gone from this game, but the chance to top the group was to play for and Mayo did their part with a comprehensive win over Meath in McHale Park.

The heavy lifting was done in the first half and Mayo went in leading 3-11 to 1-5 in blistering sunshine in Castlebar. James Horan made two changes from the team announced on Friday with Kilmeena’s Jack Carney coming in to partner Matthew Ruane in the middle of the park and Ryan O’Donoghue slotting in for Paul Towey. Meath for their part made eight changes to the team in the programme before throw-in.

Darren McHale who was handed the number 11 shirt for the day kicked Mayo into the lead two minutes with a neat score on the turn.

Cillian O’Connor got his first of the day from a free two minutes later after McHale was fouled out on the left, and a minute later he got his second pointing mark from the right.

Meath got their first point of the day seven minutes when when Jack O’Connor finished off a strong run with a fine point, but that was instantly replied to by another O’Connor pointed free from the middle of the D after Carney was fouled as he got a shot off that hit the post.

The visitors cut the gap back to two points through a Jack Flynn free after Eamon Wallace ad been fouled on the ten minute mark. But Mayo were able to edge back in front thanks to Michael Plunkett point from the right wing.

The first goal of the day arrived on the quarter of an hour mark when Bryan McMahon was finished form close range after Robert Hennelly had got down well to save a shot from David Dillon after he broke through the heart of the Mayo defence to level the game up.

But that was the last time the two sides would be tied, with Matthew Ruane and Fergal Boland kicking points to put Mayo two clear at the water break.

Mayo hit their first major of the day not long after the resumption, Bryan Walsh was fouled as he shaped to shoot for goal and penalty was awarded. Cillian O’Connor stepped up and dispatched the ball to the back of the net with aplomb. 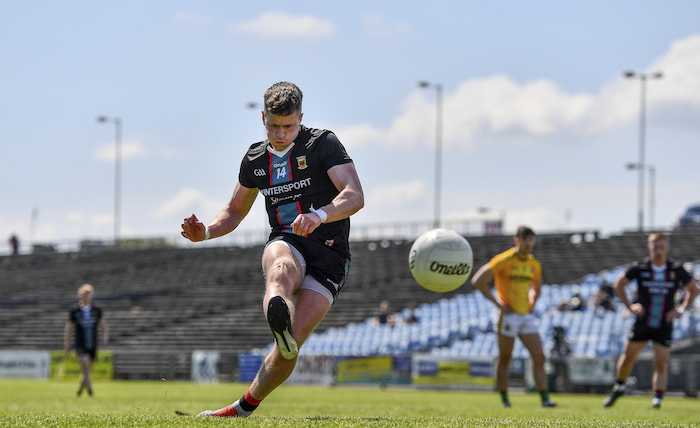 From the spot: Cillian O'Connor puts away his penalty kick. Photo: Sportsfile

The next score was another Mayo goal, this time with the O’Connors providing he ammunition. Cillian picked out Diramuid who rode a tackle and fed the ball into the path of James Carr who palmed it to the net from close range and after some consultation with this umpires Martin McNally awarded the goal.

Carr didn’t wait long to have another big say on the game pointing from distance after Mayo won the ball back from the resulting kick-out and it was all Mayo from here on, with Cillian O’Connor scoring a great point from a shot on the turn, McHale and Walsh adding points before Mayo’s third goal of the day arrived.

Carr was the man to get it, leaping high to field the ball and then turning at speed and firing the ball low past Harry Hogan in the Meath goal - to round off the scoring for the half sending Mayo in leading 3-11 to 1-5. 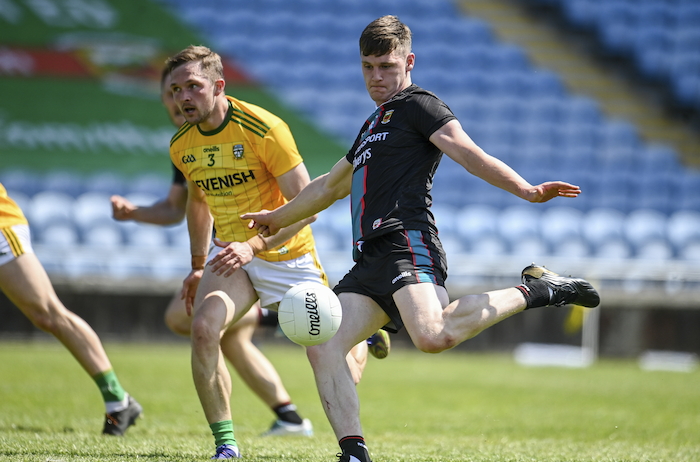 As a contes that was the game done and the second half was a far less hectic affair, with Bryan Menton’s goal early in the half a highlight.

Mayo did get to introduce Aidan O’Shea in the last 35 minutes for his first game time for the season and he chipped in with a point not long after he got on the field.

For Mayo it’s on to the semi-final and game to put themselves back up to division one at the first attempt - and after dispatching all that have come before them so far in this division, they’ll be confident of doing just that.